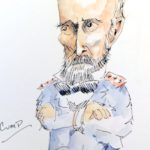 Well into his adult life, Cump Sherman considered himself a failure. So did others. He had attended West Point and had accomplished some relative successes in his military career. But when he left the army, he proceeded to fail at everything he tried. His health — he suffered from asthma — and his mental stability were • Read More »