Churchill: the man who loved to write 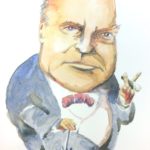 We know him as a great statesman, the man who led the fight against Nazi Germany, the one who provided the lion of Great Britain its roar (as he once put it). He gave voice to the grit and determination of the British Empire when it went through its darkest hour. But Winston Churchill, being • Read More »