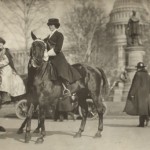 Women’s History Month: The 1913 Washington Suffrage Parade was led by Jane Burleson, the grand marshall of the parade. Burleson was a well-known horsewoman in Washington, and her confidence in the saddle is evident from this picture. Burleson led more than 5,000 parade participants up Pennsylvania Avenue and into a melee that changed the direction • Read More »