Archives: The Suspicions of Mr. Whicher 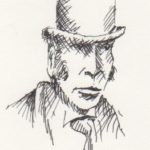 Criticizing the police and their methods — and defending them — has never been out of fashion. It’s been part of the social fabric since the Metropolitan Police Force was officially organized in London in 1829 by Sr. Robert Peel. In America, the criticisms often involve race. In Great Britain of the 19th century, the • Read More »

The man who wanted every book; the quintessential English detective; and the first American crime novel; and morenewsletter May 18, 2018

This newsletter was emailed to everyone on Jim’s email list (2,644) on May 18, 2018   A summer head cold attacked me this week, making life miserable for a few days, but I tried not to let it slow me down too much. The major woodworking project that I mentioned last week was completed and • Read More »