February 5, 2018 | By Jim Stovall | No Comments | Filed in: books, freedom of speech, freedom of the press, newsletter, watercolor, writers, writing. 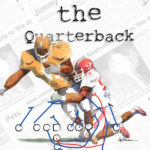 This newsletter was sent to everyone on Jim’s email list (4,222) on Friday, February 2, 2018. Hi, I watched a super moon, a blood moon, and a lunar eclipse this week. Not as spectacular as the solar eclipse we saw last summer but still pretty phenomenal. Nature has its moments — many of them, in fact, if we would • Read More »