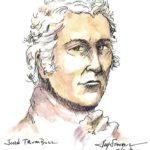 Artist John Trumbull had been in London only a short time in 1780 when he started working on a full-length portrait Great Britain’s arch American enemy George Washington. Trumbull, a former colonel in the Continental Army, was clearly violating the pledge he made to British officials not to participate in political activities. Ostensibly, he was • Read More »