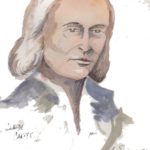 A full half-century before Samuel Morse demonstrated his electric telegraph system in America, a long-distance and extremely effective communication network existed in France. The network was developed by Claude Chappe (1763-1805), a scientist who realized that the human eye was an excellent device for discerning angles, even at long distances. He took that idea and developed • Read More »