May 25, 2017 | By Jim Stovall | No Comments | Filed in: books, journalism, journalists, news, reporters, reporting, self publishing.

A lot of buzzing and scoffing these days in the world of independent publishing about the “fact” that ebook sales are down. Blogger Nate Hoffelder tries to set the facts — the real facts — about ebook sales straight. Source: Damn the Facts: The “Ebook Sales Are Down” Narrative Must be Maintained at All Costs • Read More » 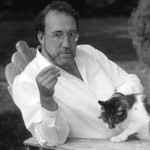