The man who wanted every book; the quintessential English detective; and the first American crime novel; and morenewsletter May 18, 2018

This newsletter was emailed to everyone on Jim’s email list (2,644) on May 18, 2018   A summer head cold attacked me this week, making life miserable for a few days, but I tried not to let it slow me down too much. The major woodworking project that I mentioned last week was completed and • Read More » 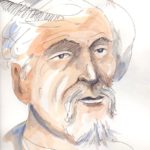 Hernando Colón (1488-1539), the illegitimate son of Christopher Columbus, spent much of his life traveling around Europe — and later America — amassing what was then the largest private library in the world. His goal was to collect all of the knowledge of the world into one place (Seville, Spain, as it turned out) because • Read More »