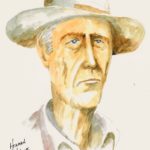 When The Winds of War mini-series premiered on the ABC television network in 1983, the small box in the living room could barely contain the gigantic tale of worldwide proportions that its author Herman Wouk had conceived. It was the story of the coming of World War II in Europe and elsewhere, and its central character • Read More »

Tags: Herman Wouk, The Caine Mutiny, The Winds of War