Hemingway on writing, Fraser at writing, counterfeit books, and a podcast: newsletter, June 28, 2019

This newsletter was sent to everyone on Jim’s email list (2,7xx) on Friday, June 28, 2019. The great satisfaction of a project nearing completion came for me this week with the arrival of proof copies of Loyal Mountaineers: The Civil War Memoirs of Will McTeer. McTeer left his home near the Great Smoky Mountains in • Read More » 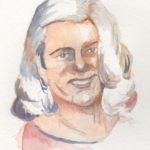