When the novel Primary Colors was published in 1996, it caused a sensation inside the core of political and journalistic elites from Washington to New York. The novel was a thinly veiled recounting of the 1992 presidential campaign of Bill Clinton, and it was none too flattering to its protagonists, Bill and Hillary. The novel • Read More » 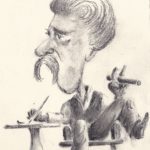 This newsletter was sent to all of the subscribers on Jim’s list (2,951) on Friday, Dec. 28, 2018.     This is the last newsletter of the year and time, once again, to thank all of you newsletter readers for reading and responding. You have given me so many good tips about articles and books. • Read More »