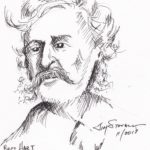 Before he became famous for his wild tales of the then New West, Bret Harte was a journalist and had broken one of the biggest stories of the era in pre-Civil War California. Born in 1836 in Albany, New York, Harte moved to California with his family when he was a teenager. He worked at • Read More »