Archives: A Day in the Life of Ivan Denisovich

Alexander Solzhenitsyn, during the 1970s, was a hero in the West because as a Russian writer, he chose to stand against the Soviet empire and expose its corruption and inhumanity. His weapon was a short novel titledA Day in the Life of Ivan Denisovich, which recounted the experiences of a Russian man sentenced to a Soviet • Read More »

Tags: A Day in the Life of Ivan Denisovich, Alexander Solzhenitsyn, Michael Scammell

Literary deceptions, caricature, and a writer vs. an empire: newsletter, Dec. 14, 2018 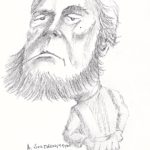 This newsletter was sent to all of the subscribers on Jim’s list (2,967) on Friday, Dec. 7, 2018.     Literary deceptions and caricatures (again) — those are the items we focus on in this week’s newsletter. But there more, too. When is it okay for an author to deceive readers? We have two instances • Read More »