Vietnam Voices – On the deck of a carrier

Episode Summary Robert Jones was an electronics technician for the U.S. Navy aboard the USS Intrepid during the Navy’s Rolling Thunder campaign in 1968. He volunteered for flight deck duty because “that’s where the action was.”   Episode Notes Robert Jones was a petty officer, first class, serving in an air attack squadron aboard the • Read More »

Episode Summary Most of the armed servicemen in Vietnam were in non-combat roles. One was Buddy Mitchell, who found himself in the “Peace Corps with a gun.”   Episode Notes Horace “Buddy” Mitchelll served in Vietnam June 1969 to June 1970  in the First Air Cavalry.    He was an artillery sergeant in the Fire • Read More »

Vietnam Voices – This is not a game 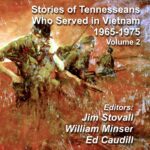 Episode Summary Marine Corporal Anthony Joyce describes being out on patrol with his unit soon after getting to Vietnam and realizing that people in the jungle are trying to hurt or kill him and his buddies. Episode Notes Corporal Anthony “Tony” Joyce was with the 1st Battalion 3rd Marines, 3rd Marine Division, 1964-1965. It was • Read More »

Episode Summary Bill Beaty, an attack pilot in the U.S. Navy, tells what it was like to fly bombing missions over North Vietnam in 1970. “I got shot at a lot,” he says. Episode Notes William Beaty retired from the U.S. Navy as a Naval Aviator, serving in-country from November 1970 to June 1971.  He • Read More »

This is the second episode in our podcast series, Vietnam Voices. Episode Summary Billy Minser talks about his Army unit’s incursion into Cambodia and their making contact with the North Vietnamese.   Episode Notes Billy Minser spent six months of his year-long tour in Vietnam as a forward observer for an Army combat unit. In • Read More »

This is the first episode of our new podcast series, Vietnam Voices: Air Force medic Aubrey Moncrief is assigned to a Green Beret unit in 1968 in Vietnam during the Tet offensive. He describes a patrol he was on when two helicopters were shot down and a pilot is wounded.  Aubrey Moncrief joined the Air • Read More »