A name for this newsletter; more on Shakespeare; the lost eloquence of the sports page: newsletter, Feb. 23, 2018

My life is continually blessed with remarkable people and interesting information. Those people include readers of this newsletter. You folks continue to write, sometimes to correct, sometimes to add to what I have written, and occasionally to compliment.

And just so you know, the newsletter is going out to about 3,500 people this week; that’s down from more than 4,000 a few weeks ago. I trimmed the list down to eliminate folks who had not opened and engaged in the past few weeks. Then I added a few from the Amazon gift card raffle that a few of us authors sponsored. The total number of people on the list is not important. What counts, they tell me (they being the “experts” in this field), is the “open rate,” the percentage of folks who actually open the email and click to display the images or click on one of the links. A good open rate is about 25 percent. For the past few weeks, the open rate for this newsletter has been 38-40 percent.

So, many thanks to you readers.

Shakespeare’s effect on the English language

Last week the newsletter had a piece about a recently discovered source for some of William Shakespeare’s writing. We have no direct knowledge of what sources Shakespeare used or what he read, so everything in this realm has to be said tentatively. What we do know about Shakespeare is the effect that he had on the English language. Shakespeare was the first to use many of the words commonly used today. He turned phrases that were so meaningful and memorable that we still use them everyday.

The list of phrases is long and varied: the game is up; the truth will out; if the truth were known; send him packing; laughing stock; green-eyed monster. The words, too: swagger, bedazzle, hurry, and many more.

Check out this short piece on JPROF.com to find more. Watch the video. Then go exploring yourself. What’s your favorite word or phase that Shakespeare originated?

Next week: One more piece about Shakespeare (unless something else comes up); What did Shakespeare look like?

Vince Vawter’s new novel: Copyboy; to be released in August 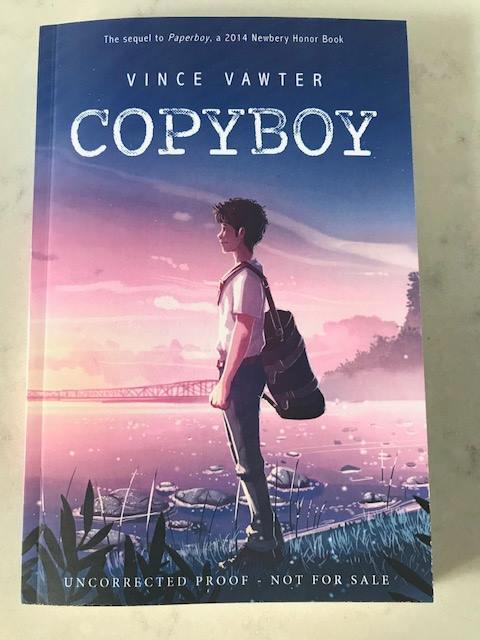 Friend and fellow newsletter reader Vince Vawter is about to have has second novel published, and it deserves mention here. Vince was in Minnesota a couple of weeks ago and met with his editor at Capstone Publishing, and he tells me that they have just about settled on a cover (right).

Vince’s first novel is titled Paperboy, and it’s the story of a boy growing up in Memphis who has a stutter. Vince himself is a stutterer, and the story rings true on every page. The novel was a Newberry Honor Award winner, and the Washington Post said: “[Vawter’s] characterization of Little Man feels deeply authentic, with . . . his fierce desire to be ‘somebody instead of just a kid who couldn’t talk right.”

Vince spent his professional career in the newspaper business and finished as the publisher of the Evansville (Ind.) Courier and Press.

His new title is Copyboy, and it’s a book to look forward to. It’s the story of a young man’s trip down the Mississippi River to New Orleans, and it should be out in August.

The lost eloquence of the American sports page

The American sports page, in the Golden Age of the 1920s, was the home of lyrical, eloquent, and erudite writing that honored the magic of athletic competition as well as the magnificence of the English language. Consider this paragraph:

“Outlined against a blue-gray October sky, the Four Horsemen rode again. In dramatic lore they are known as Famine, Pestilence, Destruction, and Death. These are only aliases. Their real names are Stuhldreher, Miller, Crowley and Layden.”

That’s how Grantland Rice, sports writer for the New York Tribune, began his account of the Notre Dame-Army football game of 1924. Notre Dame, led by its great backfield, won the game against a strong team from the United States Military Academy (Army).

No paragraph in the history of sports journalism has been quoted more than this one. The “Four Horsemen” became part of the legend of Notre Dame football, and publicists at the University placed the four footballers on four horses for a famous photograph. That photograph was turned into a postage stamp more than 50 years later.

Some of the greats of American literature — Ring Lardner, Damon Runyon, Jimmy Cannon — were sports writers. Read more about this topic on JPROF.com and then follow the links for even more information and great writing.

One of the often-overlooked phenomena of the 1960s — the time when I was a teenager and grew into adulthood — was the change in the status of American women during that decade. The change was one of the major motivating ideas for my writing the novel Point Spread. The central character of that novel, Maxine Wayman, has dreams and ambitions, but she runs into the roadblock of “being a girl.” Read the rest of this post and find out more about the book, The Feminine Mystique, on JPROF.com.

For a couple of weeks now I have asked: Does this newsletter need a name?

I have mentioned The Writing Wright and JPROF Journal. One reader suggested Jim’s Jottings. Another: Jim’s Musings. Then newsletter reader and regular correspondent Tod wrote this:

A name? “The Stove” would be unique. Or “Pot-bellied Stove.” We could keep warm by The Stove. I am mildly against the use of references to “writing” (jotting, journal, scribbles, and so on) in the name of a journal or newsletter because that would be redundant*. Of course it’s a journal/jotting/diary; you don’t need to point out the obvious. Besides, such use is all too common. You want something unique and not look like part of the crowd. “The Quarterback Sneak” sounds interesting and it plays on your football titles.

* sort of like the local newspaper of a town in Virginia, the Newport News News.

That got me to thinking. What about The Hot Stove League? That expression comes from the baseball world, and it describes a time when people would sit around a hot stove in the winter and discuss last season or next season or politics and books or anything else that might be on their minds. I like it. I may go with it.
Let me know what you think.

It is gratifying beyond words — and extremely humbling — to receive compliments about this newsletter from readers. Lately, my cup runneth over.

Maria K: It’s always very diverse! and very informative. I may not always click on a link, but I do read it from start to finish. Thank you,

Alice C: I would like to take a moment to compliment you on your newsletter. Not only do I take the time to read it each week, but I look forward to it as well. I look forward to the eclectic content as I find there are always one or two articles which elicit further exploration.

Dorothy B: I am opening and enjoying your newsletter, Jim. Thanks for sending it.

Angie L: Me, Myself and I ( sorry it had to be done) look forward to opening and reading every part of your newsletter. I think I would really miss them should they stop. 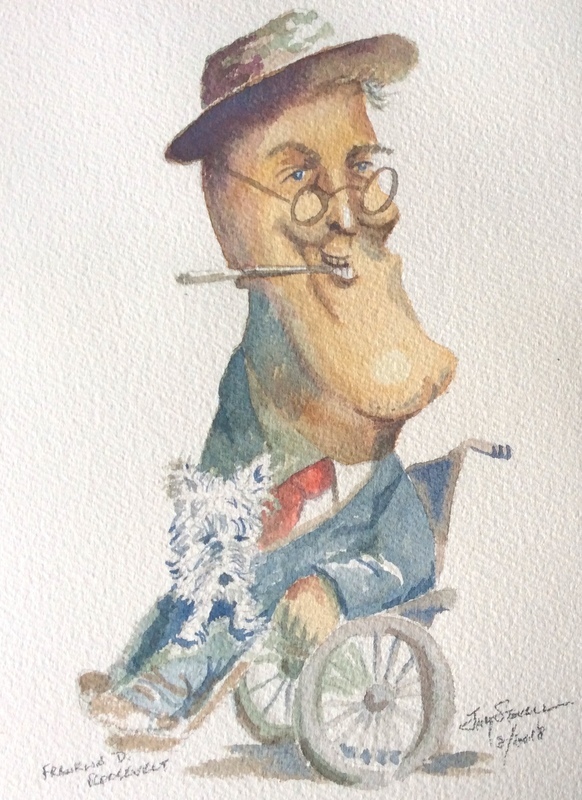 Last week it was Eleanor. This week it’s Franklin. I’ll have more about them both in next week’s newsletter.

The trade of governing has always been monopolized by the most ignorant and the most rascally individuals of mankind.

One comment on “A name for this newsletter; more on Shakespeare; the lost eloquence of the sports page: newsletter, Feb. 23, 2018”