This has been The Week of Interesting Things for me. Most of my weeks could take that moniker, but this one seemed especially full. I try to put a lot of interesting things I find into the newsletter, but I just didn’t have time to get everything I wanted to this week. Still, there’s a lot of good stuff here this week.

And speaking of the newsletter, if you’re interested, this week I am opening the hood on it. I have written a blog post about what it is and why it exists. The beginning of that blog post is down below the signature, and there’s a link there to the rest of it on JPROF.com.

Leonardo’s journals – and inspiration versus execution

Leonardo da Vinci had one of the most agile, inquisitive, and incisive minds in all of history. We know this because he kept journals — thousands of page of journals in which he wrote what he thought and drew what he saw and imagined. His curiosity was boundless, and no question (“How does a bird swallow?”) too small to be delved into, analyzed, and answered. Every idea for invention or improvement needed to be recorded. Multiple scenes and people needed to be sketched.. 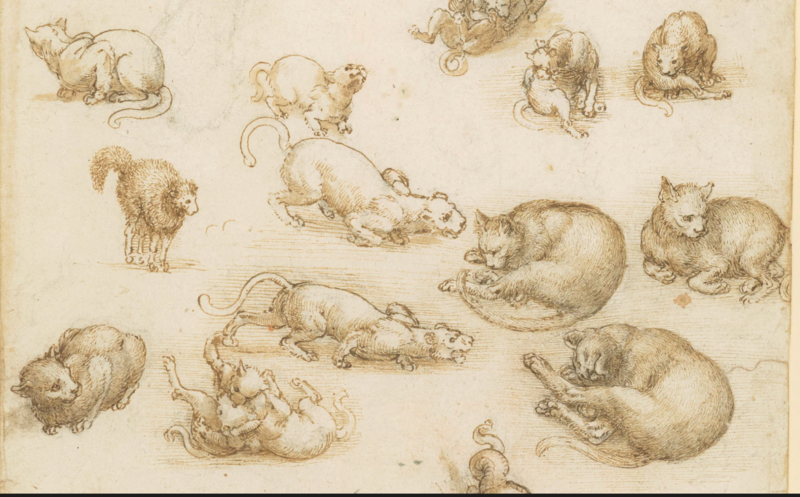 In all, according to biographerWalter Isaacson, we have about 7,200 pages of Leonardo’s journals in various collections in museums and libraries around the globe. That’s probably about 25 percent of what he actually produced. Yet with all this energy and activity, Leonardo left this world with only about 20 completed paintings and dozens of unfinished works.

Leonardo was obviously more interested in satisfying his curiosity and capturing an inspiration than in completing his projects. I’ve written a short article on JPROF.com about Leonardo’s journals and have a couple of examples of his pages.

Football art and the First Amendment

Artist Daniel Moore, a friend for some years, has made a good living in the world of sports art. For the past 40 years, he has executed photo-realistic oil paintings of some of the iconic moments in the University of Alabama’s football history. Daniel just announced that he is working on a major painting that commemorates Alabama’s latest national championship victory. Daniel usually produces several types of prints from his paintings, and each a limited edition (that is, he will produce a certain number of prints and no more).

It is no surprise that each edition 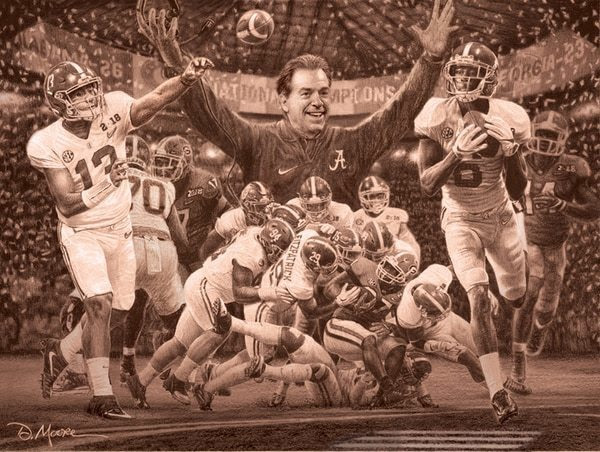 of this latest painting has already sold out — even before the painting itself has been complete. (At right is a pencil drawing of a compositional sketch for the painting.)

Whether or not you are interested in football or sports art, all of us owe Daniel a debt of gratitude for using his personal resources to stand up for the First Amendment. Several years ago, the University of Alabama tried to force Daniel into paying a license fee for the work he was doing. Daniel resisted, and a years-long legal battle ensued. You can find out more about that in this article on JPROF (less than a five-minute read).

Pliny the Younger: Eyewitness to the First Century’s biggest event

We introduced Pliny the Younger, ancient Roman’s best journalist, to you last week with the fact that he was the author of the earliest non-Jewish account of Christianity that exists today. Pliny’s description of the Christian community in Turkey, where he was the Roman governor, is fascinating and enlightening. For that description alone, Pliny would have achieved immortality. 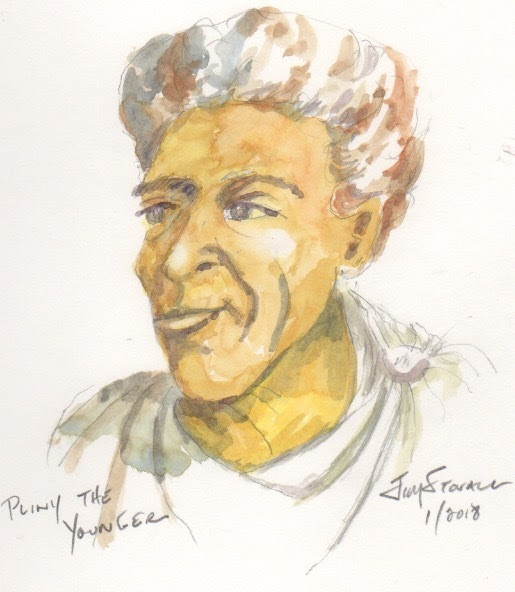 But dealing with the Christians at that time was a minor administrative matter, and if he had not done that, we still would remember him for what he saw when he was about 19 years old: the eruption of Mt. Vesuvius in 79 A.D. Pliny was living with his uncle (and adoptive father) Pliny the Elder, who was a high-ranking Roman official in Misenum, a town north of Vesuvius on the west coast of Italy.

The eruption of Mt. Vesuvius was undoubtedly nature’s most spectacular event in the first century (it destroyed the towns of Pompeii and Herculaneum), and Pliny describes what he saw in detail. But the eruption had a deeply personal outcome. Read more about this in this post on JPROF.

Giveaways and a chance to win an Amazon gift card

A kind reader has pointed out that our gift card raffle is not a giveaway but alottery. She is absolutely correct, and I will stop referring to it as a giveaway. Nevertheless, please consider entering. The information is below. 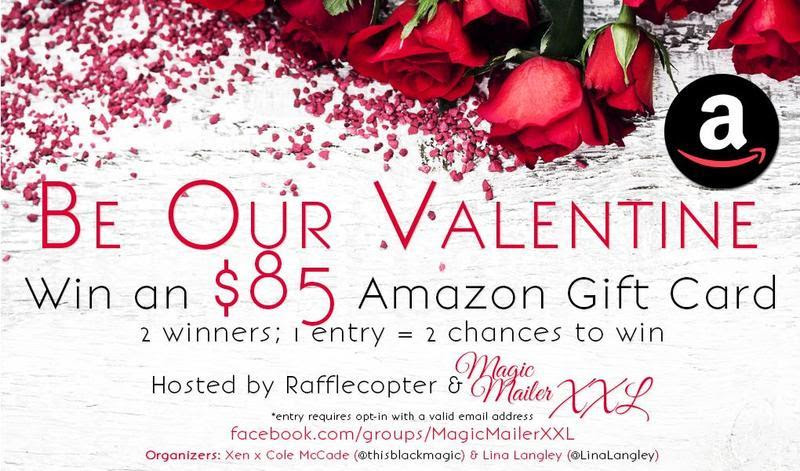 Be Our Valentine gift card giveaway.Once again, I have joined with a number of other independent authors to sponsor an Amazon gift card giveaway. We havetwo $85 gift cardsthat are the prizes for this month’s giveaway, so don’t miss out. Go to this link:https://www.rafflecopter.com/rafl/display/ad6cea03… You will need to enter a valid email address, and that address will be shared with the authors who are participating. The giveaway lasts until Feb. 15, so head over there today and get your name on the list. If you go to this link and find that you cannot enter your email, it means that you are already signed in (probably through Facebook); all you have to do at that point is click on ENTER, and your email will become part of the list.

For the most part, we’re going to take a short break from our sleuthing for crimes against English this week and enjoy this fun video on YouTube. It’s called 10 Letters We Dropped from the Alphabet, and it was put together by Austin McConnell. 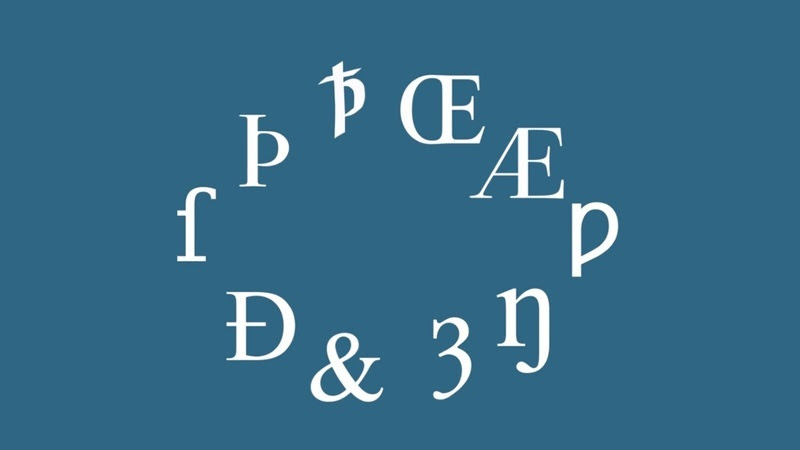 English consists of 26 letters which we all know, more or less, in the right order.

At one time, however, there were as many as ten more. Find out about them, and what happened to them, here on YouTube:https://www.youtube.com/embed/zUrDUxh5xS0

Now, back to our sleuthing (somewhat): A Word A Day a couple of weeks ago featured tautologous, which is taken as a synonym for redundancy, which we have been discussing for a couple of weeks now. Here’s what some of the readers of AWAD wrote in that was include in its Sunday roundup:

“One that drives me nuts (and is very common in the UK) is “6 am in the morning”. I’ve even heard people talking about catching “a very early flight at 5 am in the morning”, which I suppose is a double tautology.”

“As one who plans ahead (in advance, that is), and has a personal opinion on the matter, I find a little tautologous redundancy is a free gift to the reader when the true facts are presented.“

“Here in New Mexico we laugh at the tautologous “Rio Grande River”. But then, most American states are not, by law, bilingual.“

OK, rest time is over. Get back to your sleuthing. What crime against English have you discovered?

Does this newsletter need a name? I think that maybe it does. I have been turning over a couple of possibilities — The Writing Wright and JPROF Journal. Do you have a suggestion? 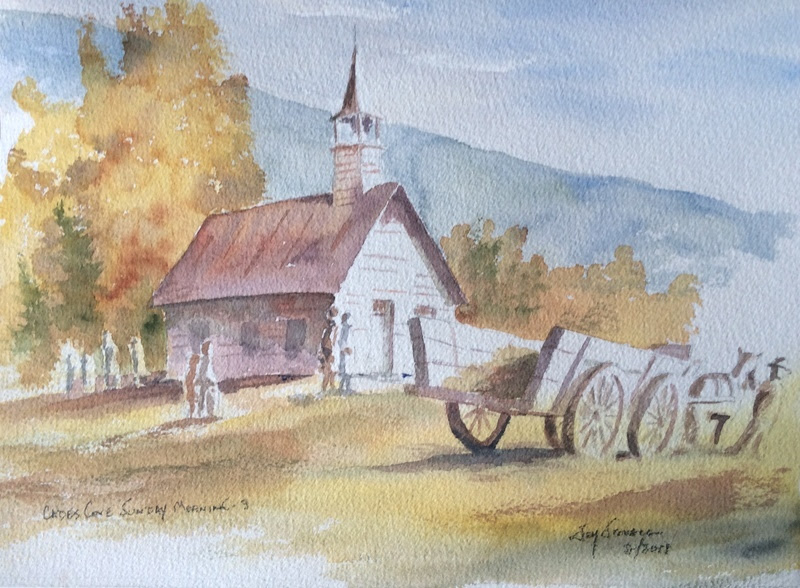 Thanks to all for making last week’s painting giveaway a great success. All but one of the paintings were claimed within about three hours of when the newsletter first went out. The final painting was gone by Sunday. I am going to organize another giveaway, probably in March.

Let it be the dream it used to be.

Let America be the dream the dreamers dreamed –

Let it be that great strong land of love

That any man be crushed by one above.

Jim’s newsletter: Under the hood

My newsletter is a set of thoughts, notions, links, tidbits, giveaways, quotations, and other items that give readers an idea of what I have been doing, reading, and thinking about in recent days. We talk about journalism, writers, writing, the English language, fiction, mysteries, and podcasts. Sometimes we stray off into other areas, such as watercolor or even sports (but if it ain’t baseball, it ain’t such a big deal). My interests and activities range into a number of areas, and my hope is that readers will follow along.

Readers respond regularly to what I have written, and unless there is reason to do otherwise, I include many of those responses in the next week’s newsletter.

My assumption about newsletter readers is that they are intelligent individuals, they are readers of good books, and they people who can handle the occasional challenge of learning something new. These are people who can think for themselves.

Most of all, my assumption about newsletter readers is that they are my friends, even though I have not met all of them personally.