I watched a super moon, a blood moon, and a lunar eclipse this week. Not as spectacular as the solar eclipse we saw last summer but still pretty phenomenal. Nature has its moments — many of them, in fact, if we would just pay attention. I don’t do that as much as I should.

Then there’s the Super Bowl, a decidedly unnatural phenomenon. That occurs this weekend. A bit more below.

Last week we went back to the nineteenth century to take a look at Eugene Francois Vidocq, the world’s first private detective. This week we go back even farther — all the way to the second century — and leave behind, for the moment, the world of private eye literature. Pliny the Younger did not write detective fiction, but he could have. He had a prose style that was, for its time, as succinct and straightforward as that of Dashiell Hammett. 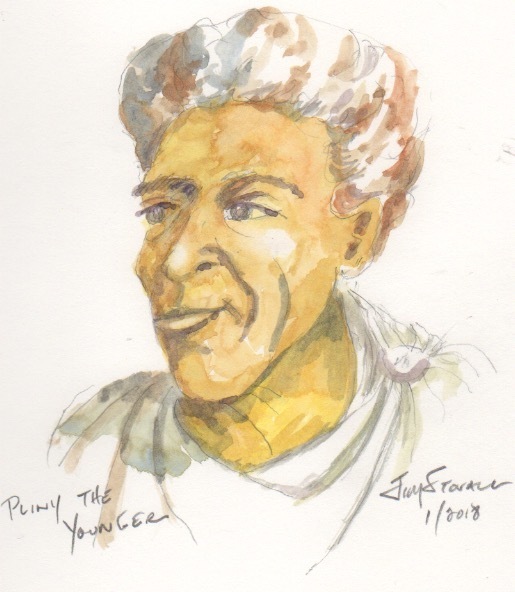 Pliny the Younger was a much-traveled, widely experienced lawyer and government official who wrote dozens of letters about what he had seen and heard. He is one of the best sources we have as to life in ancient Rome. Two of his observations — scoops, as we would say in journalism — stand out from all his others, however.

Pliny the Younger gives us the first non-Jewish description of Christianity that we have in all of ancient literature. In a letter to Emperor Trajan written about A.D. 111, Pliny — then governor of an area that today is Turkey — describes his dealings with Christians as well as their attitudes and practices. It is a fascinating read. I have posted a short article about it on JPROF, which includes the letter to Trajan and Trajan’s response.

Pliny has an even bigger scoop than that to his credit. In A.D. 79, when he was still a teenager, Pliny was an eyewitness to the most spectacular event of the first century: the eruption of Mount Vesuvius and the destruction of the city of Pompeii. I will have more to say about this next week.

The passing of Ursula Le Guin

The world is diminished when a writer of power and imagination dies. So it was a few days ago when the world lost Ursula Le Guin. Science fiction fans will know her work because she was an unabashed and unapologetic defender of that genre. 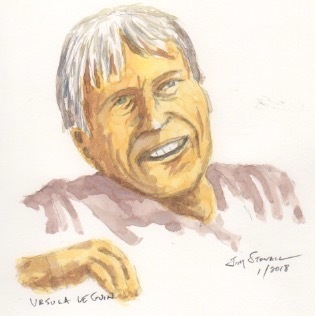 She had her reasons. Science fiction allowed Le Guin to imagine worlds that, while not perfect, had left behind many of the problems that beset us today. Le Guin was a powerful writer who could keep readers in her grip.

She was also an acerbic though not unkind critic of modern life. I have written a short piece about her on JPROF with links to other reviews of her life and work.

A true crime podcast that I recommended last week, In the Dark, deserves another word. In the Dark examines the kidnapping and murder of Jacob Wetterling from his rural Minnesota home in 1989. The crime sparked a world-wide manhunt that turned out to be futile. The crime was unsolved for 27 years, but it led directly to many of the sex offender registration laws that are on the books today.

That’s why I am putting forth this recommendation again. Madeleine Baran, the chief reporter for In the Dark, examines these laws — their effectiveness and their justice — in Episode 6 of the podcast series. As you listen to it, you may find yourself re-examining the way we treat sex offenders in this nation. I did.

Baran doesn’t stop there. Part of the news narrative in these cases is that “. . . the police are doing all they can. They’re turning over every stone, following every lead, . . . etc. etc.” That narrative is comforting to hear and easy to report. Unfortunately, in this case and in others, it isn’t true. Baran takes a cold-eyed look at this part of the narrative (Episode 7) in a deep investigation and finds the real story not at all comforting.

The journalism of In the Dark is truly outstanding. 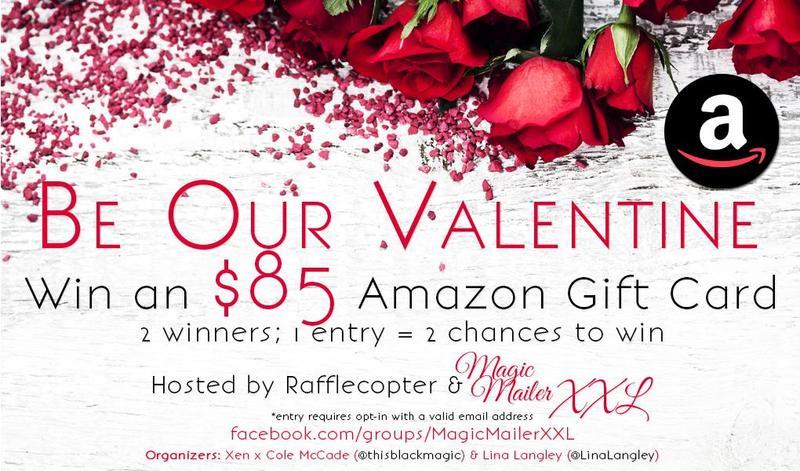 Be Our Valentine gift card giveaway. Once again, I have joined with a number of other independent authors to sponsor an Amazon gift card giveaway. We have two $85 gift cards that are the prizes for this month’s giveaway, so don’t miss out. Go to this link: https://www.rafflecopter.com/rafl/display/ad6cea03… You will need to enter a valid email address, and that address will be shared with the authors who are participating. The giveaway lasts until Feb. 15, so head over there today and get your name on the list.

My hobby of collecting redundancies, which I wrote about last week, drew a number of responses, both to JPROF.com and directly to me.

Jim S.: Of course, the classic redundancy: I never repeat myself! Never!

Laurie B: I love these! I “collect” some odd literary things too. Mostly oxymorons like “jumbo shrimp,” etc. I also love when people’s names form a sentence, like Britney Spears, Ben Folds, Stevie Nicks, Jeremy Irons…

Vince V.: A redundancy that seems to have come into common usage recently (I heard it several times last night in the University of Tennessee’s win over Vanderbilt) is saying that someone can “score the basketball.” For instance, a sportscaster might say, “So-and-So was having trouble with his 3-point shot, but he is really scoring the basketball now.” Pray tell, what else would he be scoring?

So what do you collect?

Please, keep the responses coming. What crime against English have you discovered?

This week’s watercolor: The hit 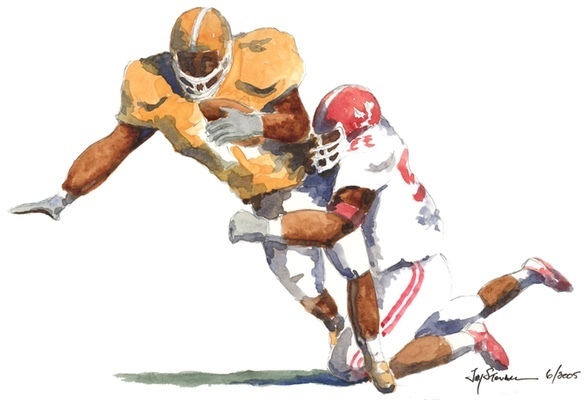 The Super Bowl, an American phenomenon, occurs this weekend. I won’t be watching — I haven’t watched one in years — but some of you will, so this watercolor is for you. I did this several years ago, and it later served as the cover art for Kill the Quarterback.

In the newsletter last week, I set up a giveaway of some of my original watercolors — things I would never hang (no wall space left) and probably would not get rid of. I did not know if anyone would want any of them, Well, it turns out that many of you did. They were all claimed within three hours of the newsletter going out.

So, I thought I would do it again.

The rules of the giveaway are the same as last week with one exception. I am asking you to pick a first choice and a second choice.

Go to this page on JPROF.com. Right now, the offer is only to readers of this newsletter, and the post is password protected. The password is watercolor.

Two reasons. One is that I doubt that I will ever have a show or try to sell any of these. So, rather than have them languish in my closet, I would like to get them into the hands of people who might like them.

“Hard times are coming, when we’ll be wanting the voices of writers who can see alternatives to how we live now, can see through our fear-stricken society and its obsessive technologies to other ways of being, and even imagine real grounds for hope. We’ll need writers who can remember freedom — poets, visionaries — realists of a larger reality.” Ursula K. Le Guin (1929-2018)