Winter has settled in in a big way in my part of the world. Plenty of time for indoor activities, the most important of which is reading. But that’s not the only one. Some writing and some painting (see below) and drawing have also been on the schedule. I hope that things have gone well with you this week.

Ross Macdonald and the expansion of the ‘private eye’ genre 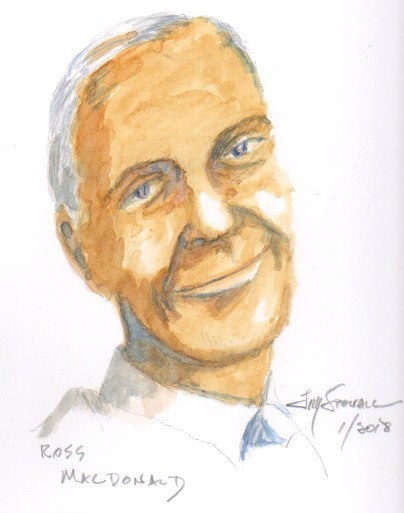 No writer among the many dozens who have entered the field explored and expanded the private eye genre as did Ross Macdonald. Macdonald lived a tumultuous life that had many similarities to his predecessors Dashiell Hammett and Raymond Chandler. The difference was that despite the difficulties of his personal situation, Macdonald was able to sustain a production of novels over a 20-plus year period that established his detective, Lew Archer, as the quintessential private eye.

I have posted a review of the work of Ross Macdonald on JPROF.com as a continuation of our weekly look at the development of the private eye in American letters.

Philip Roth on writing, reading, and politics in America

Author Philip Roth is approaching 85 and has been retired from writing for several years. He recently conducted an email interview with New York Times journalist Charles McGrath. As always, Roth is interesting, persuasive, and insightful. In a post of JPROF.com, I have included what he had to say about

You can read the entire interview here on the New York Times website.

Many of the true crime podcasts that I recommended to you before and during the holiday season took some time off during the holidays with the promise that they would be back with new episodes when the new year arrived. Unfortunately, those promises have yet to be fulfilled for most of tho 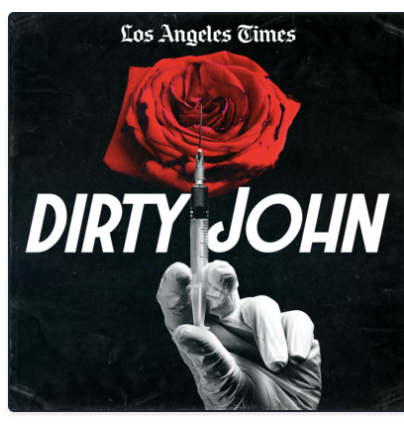 se podcasts. I am disappointed, but I will be patient. A good podcast is not an easy thing to produce; it takes effort, talent, and time.

One surprise, however, that I just discovered is a new episode of Dirty John, which was one of my personal favorites in the true crime podcast realm. Dirty John is the story of John Meecham and his manipulation, criminal and otherwise, of a number of women and their families. The podcast centers on what happened to the family of Debra Newell If you have not listened to it, you should. Now there is a new podcast that includes an interview with John’s first wife. The story of Dirty John is both horrifying and gripping.

More responses from readers who have identified crimes against English poured in this week. Thank you for each and every one. They are fascinating and delightful:

Genelle T.: I hate when people who write or talk misuse the pronouns “I” and “ME”. I hear this misuse all of the time on TV shows and even news broadcasts. One is subjective, and the other is objective. But too many times, when using these pronouns as a compound subject or object, people mess them up. “You and ME” are not going to the store…You and I are. “Someone is calling you and I” is not correct, they are calling “you and ME.” It’s easy to figure which to use. Just eliminate the other part of the compound subject or object, and just use I and then ME. You can immediately see which pronoun to use. Me is not going to the store, I am. And someone is not calling I, they are calling ME. SIMPLE.

Angie: I’m from SC now living in NC. The people here are like people from the northeast. They use way too many R’s. Someone mentioned to me that she needed to put “arr in her tirres” not air in her tires. I cringed…or someone talking about a creek running, but using the word crick…OMG .. I hate that.

Tod: I totally agree with Jim S.(last week’s newsletter) regarding the lecturn/podium issue. I first became aware of it back in the early 80s when my job had me flying around the U.S. and internationally. Hearing the gate agents use the PA and request that Passenger X “Please come to the podium” made me wonder if they were handing out an award and Pax X would be standing on a podium. Nope. Turns out they got it wrong. It was not a podium. It was not even a lecturn. It was a plain ordinary counter!

Now for two more of my “crimes…” It’s truly jail time for people who commit these – mostly talking heads on news or commentary shows.

1. A special place in hell for those anonymous people who take ordinary words and use then in unconventional ways with no regard to their etymology. E.g. optics (what are the optics in the Oval Office?), arc and trajectory (where does the arc/trajectory of this story lead?), contours (the contours of the tax plan), atmospherics (same as optics), and many others.

2. This is actually a narrow subset of #1 – creating new verbs out of thin air. The list is long but believe me, I’ve heard or read every one.
1. He course-corrected, downstaired and outdoored onto the street, where he sidewalked south.
2. We always used to course-deviate,
3. Sensing a bad winter, she anti-froze the car.
4. The front gate had been security-guarded.
5. But was he seriously saying he was going to helicopter us out of there?
6. I’m thinking we should raincheck the heavy drinking…
7. CBS News asked me if I wanted to go to the White House Press Briefing and live draw it.
8. David was extremely apologetic when I excused-me him.
9. I sat back down and Google-mapped Towne Auto Salvage.
10. I reached out with my left hand, my body still behind the wall, and rapid-fired three shots.
11. Is this a figure-outable thing?
12. Were they trying to remote-control-organize?
13. We were no-commented when we asked.
14. Make sure to room-temperature that cheese.
15. They decided to second-draft that document.
16. The Soviet Union used to own and state-control the aluminum industry.
17. You can now PayPal friends…
18. Learn more about layouting. . . .

Tori J.: I read your last e-mail with some trepidation as I was sure that someone would bring up the spelling differences between American and Commonwealth English.

I was born in the U.S. My father had been in the U.S. Army. However, he was born in London and emigrated to the U.S. with extended English and Irish family in the 1950s. My mother emigrated to the U.S. in the 1960s. We moved back to Jersey (NOT New Jersey) when I was very young and at some point I started school there. In those days school started much earlier, at least a preschool, than it did in the U.S. When we moved back to the U.S. I was too young to start school here and even too young for kindergarten. My mother was not a U.S. citizen until I was 5 years old.

I am quite used to the alternate spellings of certain words, and it does not bother me a bit. In fact, my mother went to the school at one point after a spelling test where I had been marked down for my spelling of colour. She pointed out to the teacher that it was a perfectly acceptable spelling via the OED. I received my points back. After which my mother reprimanded me for not spelling things in American English as I was in America.

To me, a greater problem is when people do not know the difference between there and their, your and you’re, and its and it’s. And all the kerfuffle about where to place the place the final comma in a list over the last few years is ridiculous. Our children cannot read or write, we have decided that they don’t need to write in cursive because it is too difficult for them, and if they have to read a book with more than 50 pages with no pictures, it is a catastrophe. I read Gone With the Wind and War and Peace in 5th grade for monthly book reports (and yes, it was because I wanted to).

Really Tod, are we going to worry about what type of English people use? There are so many other problems with the written language today, I hardly think that is of great impact. At least they are correctly spelled words somewhere. I’ve read books purchased on Amazon that have so many spelling and grammatical errors it hurt my heart to wade through them.

Thanks to all for their these witty and perceptive emails. What are your thoughts? 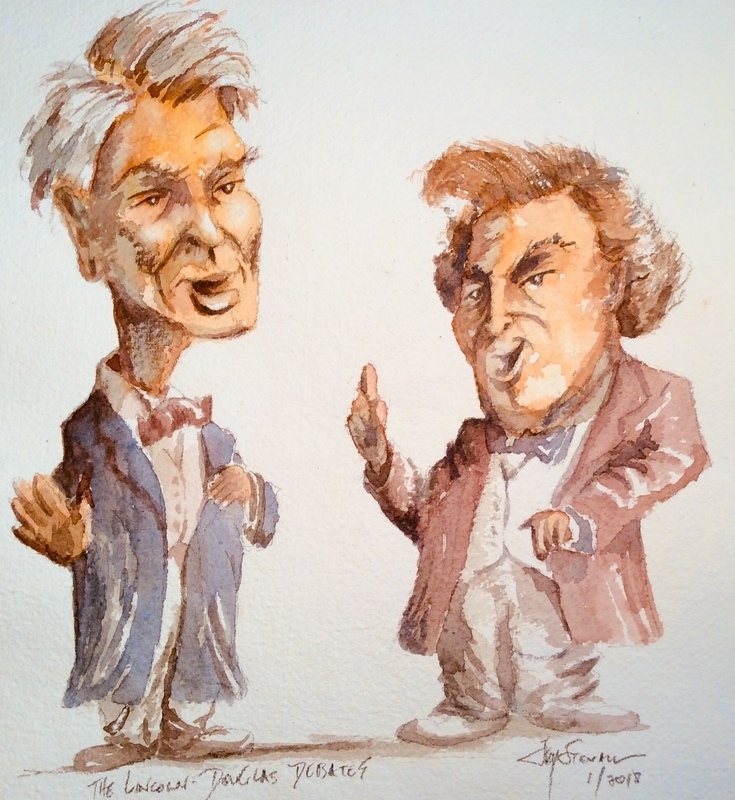 I haven’t done much caricature lately, but last weekend was one of those too-cold-to-go-outside weekends, so I thought I would have a little fun. Caricatures are usually line drawings, but these are watercolors — again, just for the fun of it.

And since you made it this far in the newsletter: Next week, I have something very special planned that involves this watercolor and other watercolors and drawings you may have see in the newsletter or on JPROF.com over the past few weeks. Watch for it.

Be kind to thy father, for when thou wert young,

Who loved thee so fondly as he?

He caught the first accents that fell from thy tongue,

And joined in thy innocent glee.

She was small, too small to be a danger to anyone. And she was attractive, a good-time girl, maybe even a little flighty. Plus, she had a talent for getting people, particularly men, to talk to her. Those traits hid her steely courage, creativity, resourcefulness — and, maybe most importantly, a photographic memory.