Raymond Chandler and the development of the ‘private eye’; newsletter, Jan. 12, 2018

Special note: If you have unsubscribed to this list previously, I apologize for this email. I had some problems with the list over the past couple of weeks — due mainly to my incompetence — and some unsubscribers may have been added back in. Click on this link Unsubscribe or the one at the bottom of the email to get off this list, and I will do my best to see that you don’t get any more emails from me.

This second week of the New Year brought some interesting items my way, and I am sharing a few of them with you in this newsletter. I hope that your New Year has gotten off to a great start.

Raymond Chandler takes the ‘private eye’ to a new place

He was a man troubled by many demons — among them alcoholism, promiscuity, and possibly depression. Despite those problems, Raymond Chandler has become a gigantic influence in the development of the “private eye” character of modern fiction. Chandler is the author of books such as The Big Sleep and The Long Goodbye, in which detective Phillip Marlowe went beyond Dashiell Hammett’s Sam Spade as an expressive and complex character. 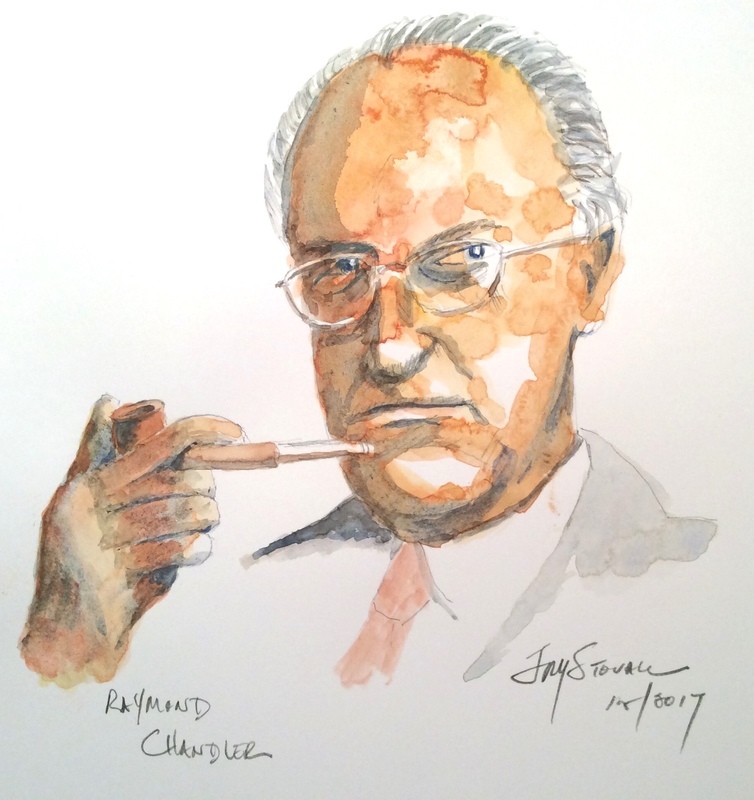 Chandler was educated in the English public school system, and when he decided to write detective fiction, he studied the genre intensely. His writing is imbued with similes and metaphors that give his scenes and characters a depth that few other “hard-boiled” writers have achieved.

Word of Sue Grafton’s death last week brought several responses from readers, these among them:

Morag F: So sad to hear about Sue Grafton, I have read a number of her alphabet books. Such a great writer.

Janet E: I too was shocked to hear the news of Ms. Grafton’s death. I am probably the only person in the world, maybe, the universe, who has not read any of her books that go by the alphabet. I plan to start doing so, very soon.

Peggy G: Thank you for your email regarding the death of Sue Grafton. I am at a loss. I developed my love of mysteries and mystery solving reading her books. So sad. Just a thought but, after a time maybe her fellow mystery writing friends and colleagues could each write a chapter of her unwritten “Z is” book as a tribute and (please excuse the trite) closure.

Helen P: Sorry to hear about Sue Grafton’s death. She was one of my favorite authors. Although Spencer has lived on with other authors, I cannot see that happening with Kinsey. I will miss her as I do Amelia Peabody Emerson and other characters who took on a life of their own. RIP

Here’s another tribute to Sue Grafton that her readers might enjoy: Victoria Comella, G is for Gratitude: Remembering Sue Grafton.

Alabama vs. Georgia, 1962: Not a national championship but more protection against libel suits 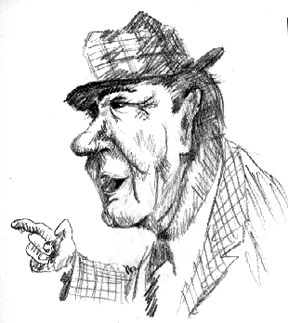 When Alabama played Georgia during the regular season of 1962, Alabama won handily, 35-0. The following spring, the Saturday Evening Post published a story saying that the game had been fixed because of collusion between the two coaches, Georgia’s Wally Butts and Alabama’s Bear Bryant (right). Both Butts and Bryant sued the magazine for libel. Butts won his suit in a trial, and Bryant later reached a settlement with the Post.

But the cases were appealed and eventually made their way to the U.S. Supreme Court. They became part of a set of cases that the court used to rewrite libel laws in the United States to promote free expression and more open debate.

You can read more about this case and its outcome in a post I’ve written on JPROF.com.

Atlanta Monster. Just when I was about to retire my podcast recommendations (at least for a while), a new one pops up that I need to tell you about. Atlanta Monster looks at the puzzling case of the Atlanta Child Murders.

In the late 1970s, young African-American boys in the Atlanta area began to go missing. When bodies of some of the missing children were found, police concluded that one person (or set of persons) was responsible. In other words, Atlanta had a serial killer on its hands. The search for the killer was widely covered by local, national, and international news media. This podcast reviews what happened during that difficult time and who was eventually brought to justice. Here’s how the producers of Atlanta Monster describe their podcast:

From the producers of Up and Vanished, Tenderfoot TV and HowStuffWorks present, ‘Atlanta Monster.’ This true crime podcast tells the story of one of the city’s darkest secrets, The Atlanta Child Murders. Nearly 40 years after these horrific crimes, many questions still remain. Host Payne Lindsey aims to find truth and provide closure, reexamining the disappearance and murder of over 25 African American children and young adults.

The first episode is now available and more should be coming soon.

I continue to receive responses from readers who have identified crimes against English. They are endlessly interesting, and I appreciate them all. Please keep sending them. Here are a couple that have come in in the last two weeks:

Jim S.: You asked for misused words that irritate. I have one.

First, I need to refer to something told to me soon after I quit smoking many years ago. They said, “No one is more irritating than a reformed smoker.”

I guess the word I selected falls into that category since I used to use it incorrectly. While I was part of a Toastmasters group, I heard someone else use the term Podium when they meant Lectern. After their talk, they were corrected for their misuse.

Being a person who loves words and such a nerd as to getting engrossed in reading parts of the dictionary, I felt self-chastised for my blatant misuse of the word Podium.

Podium is a stage on which people stand or sit. A Lectern is a stand, sometimes on a Podium, where a first time speaker places his notes and nervously grips the edges.

So, now, being a reformed mis-user of Podium, I cringe and grind my teeth when I see its abuse.

The word Podium is so frequently used in place of the word Lectern that i would not be surprised to see its meaning changed in the near future. I was really surprised when I found Grisham using the word Podium several times to refer to a Lectern in a courtroom. My edit groups would never let me get away with that, at least I hope they wouldn’t.

This is a lot of words to refer to the misuse of one word. That’s me, blah, blah, blah.

Tod: Ever since I can remember I’ve often thought about the notion of simplifying English spelling rules, after reading Dolton Edwards’ story “Meihem in ce Klasrum” in Astounding (1946), and some of Mark Twain’s comments on simplification. http://www.angelfire.com/va3/timshenk/codes/meihem.html

In the early 1800s Noah Webster compiled his first dictionary of (American) English, and one of his goals was to prefer spellings that matched the verbal pronunciation. From then through the early 20th century, various dictionaries and style guides influenced the evolution of American English from British English (no examples needed, I’m sure).

So my “crime” is how we find stories, articles, and other compositions written by American authors using American spellings that are “translated” by overzealous editors of Commonwealth printing or publishing outfits such that “color” becomes “colour,” “traveled” becomes “travelled,” and the suffix “-meter” becomes “-metre.”

I have repeatedly come across this bizarre and eccentric (and totally unnecessary) correction of words just because they don’t conform to the local standards. Take a news story from the New York Times or Atlantic magazine that has sections quoted by writers writing for The Times of London or The Economist and there will be words that some copy editor redlined. Or entire books: I’ve bought paperbacks of American authors like Asimov and Griham and every flavor and fetus becomes flavour and foetus.

So, to copy editors in the Commonwealth, don’t mess with our American language. You lost in 1776 so get over it! Go niggle the French if you have to pick on a language.

Thanks to both Jim S. and Tod for their thoughts. What are your thoughts? 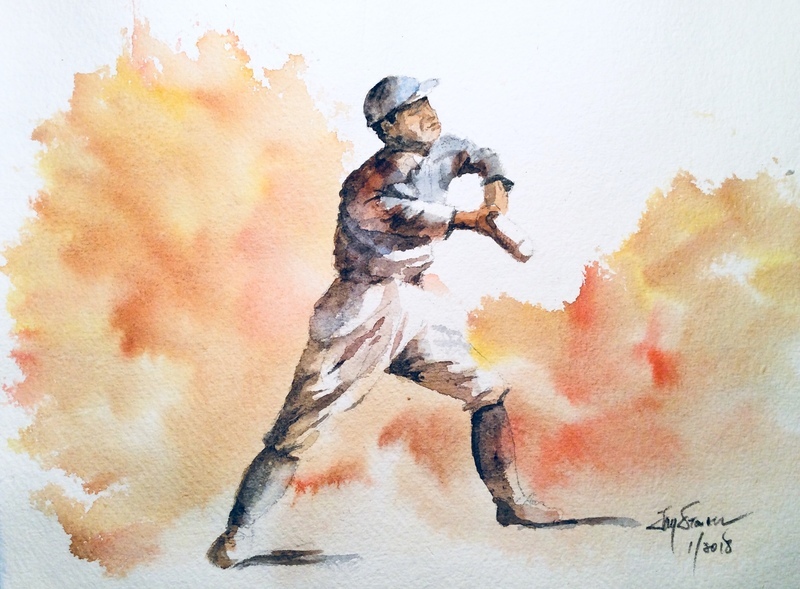 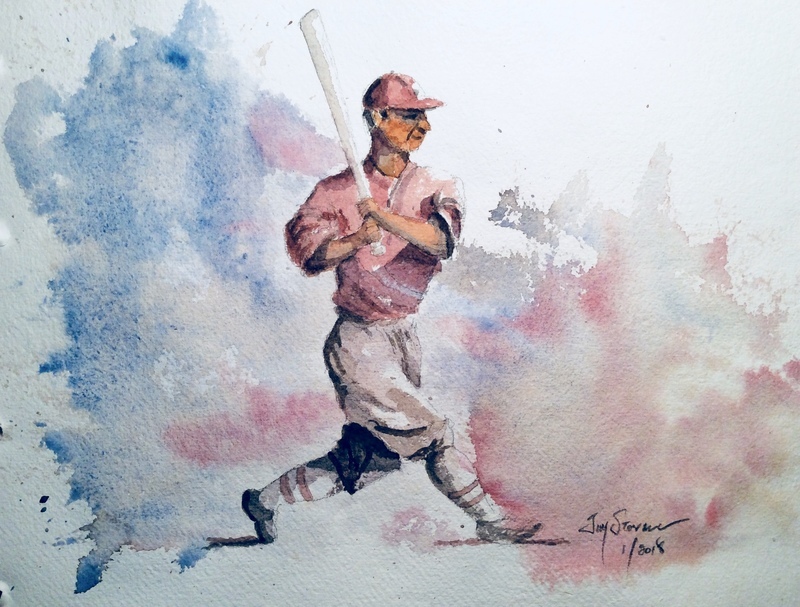 Now that collegiate football is out of the way for a few months (congratulations to Alabama on winning yet another national championship and to Georgia for a great game), we can move on to the really important stuff: baseball. Spring training is less than two months away. Enjoy these two watercolors that celebrate the game.

What really knocks me out is a book that, when you’re all done reading it, you wish the author that wrote it was a terrific friend of yours and you could call him up on the phone whenever you felt like it. J.D. Salinger, writer (1919-2010)

If you play the dulcimer, you owe Jean Ritchie a debt of thanks. If you have heard a dulcimer, seen one — or even know what one is, Jean Ritchie is the person responsible.

She was small, too small to be a danger to anyone. And she was attractive, a good-time girl, maybe even a little flighty. Plus, she had a talent for getting people, particularly men, to talk to her. Those traits hid her steely courage, creativity, resourcefulness — and, maybe most importantly, a photographic memory.