The death of a great mystery writer; and more crimes against English; newsletter Jan. 5, 2017

Special note: If you have unsubscribed to this list previously, I apologize for this email. I had some problems with the list this week — due mainly to my incompetence — and some unsubscribers may have been added back in. Click on this link Unsubscribe or the one at the bottom of the email to get off this list, and I will do my best to see that you don’t get any more emails from me.

The holiday season is officially over, and a new year has begun. I wish all of you the very best in 2018. The watercolor at the end of the newsletter gets back into landscape mode, and this week I stray a bit from the true-crime podcast recommendations.

A is for Alibi and G is for Grafton; Sue Grafton dies at age 77

Sue Grafton secured her place in the pantheon of great mystery writers in the 1980s when she began publishing novels that began with a letter of the alphabet and featured a tough-talking but vulnerable female detective named Kinsey Millhone. The novels were well-written, the plots were well-structured, and Kinsey Millhone was so well-drawn that millions of readers — male and female — could easily identify and sympathize with her.

Grafton died last week after a two-year battle with cancer. She had just published the 25th in her Kinsey Millhone series, Y is for Yesterday. Her family said she had selected the title for her next book, Z is for Zero, but had not made any progress in writing it.

I have written a tribute to her on JPROF.com.

On her website, SueGrafton.com, the author included some of the journal notes that she kept while writing some of the books, and they are fascinating to read. I have included some of those written for H is for Homicide in the tribute. As a result, I’m currently in the middle of that book, one that I have never read.

Note: Last week, we promised to take a look at Raymond Chandler. Due to Grafton’s death, we’ve put that on hold for a week.

The 100 best nonfiction books of all time?

Such lists are always arguable, and this one is particularly daunting, but we owe McCrum some debt of thanks for bringing these books to our attention.

I have included the final 25 on his list in a post on JPROF.com. See what you think. 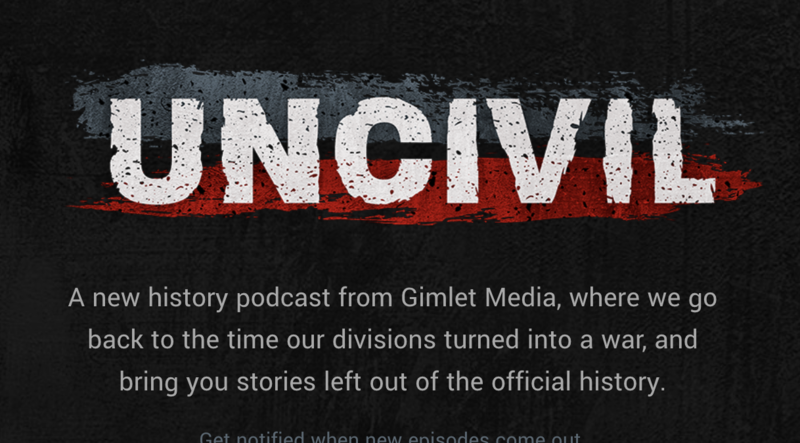 Uncivil. This week, I stray in my podcast recommendations from the strict true-crime paths and recommend something that would be more easily classified as history. Uncivil takes a look at untold or rarely told stories connected with the American Civil War, and it often looks at them with a point of view different from anything you might have heard before. Here is how Uncivil describes itself:

America is divided, and it always has been. We’re going back to the moment when that split turned into war. This is Uncivil: Gimlet Media’s new history podcast, hosted by journalists Jack Hitt and Chenjerai Kumanyika. We ransack the official version of the Civil War, and take on the history you grew up with. We bring you untold stories about covert operations, corruption, resistance, mutiny, counterfeiting, antebellum drones, and so much more. And we connect these forgotten struggles to the political battlefield we’re living on right now.

Uncivil (in my defense) occasionally deals with crime. Listen to the fascinating episode about the Yankee counterfeiter who nearly wrecked the Confederate economy. It’s No. 7: Paper on the list on this page.

See what else we’ve recommended below the signature of this newsletter.

A New Year & A New Gift Card Giveaway. We about to start a giveaway that has a $350 Amazon Gift Card prize. The giveaway is set to run Jan. 1-15, and it’s one simple entry. On Monday, click on this link below for your chance at a $350 Amazon Gift Card: http://www.rafflecopter.com/rafl/display/77deea0969/? Now you have a chance to get what you REALLY wanted for Christmas.

I continue to receive reports from readers about crimes against English. This from Jean T. in the United Kingdom:

Then a couple of days later, I received this, also from Jean, who obviously is traveling:

Another irritating mistake is mixing up “your” and “you’re”. We’ve been in New Zealand and yesterday saw a camper van with the slogan beautifully painted saying “gambling is only a problem if your losing “

About to arrive in Australia – then home to cold England

This week’s watercolor: A Walk in the Woods 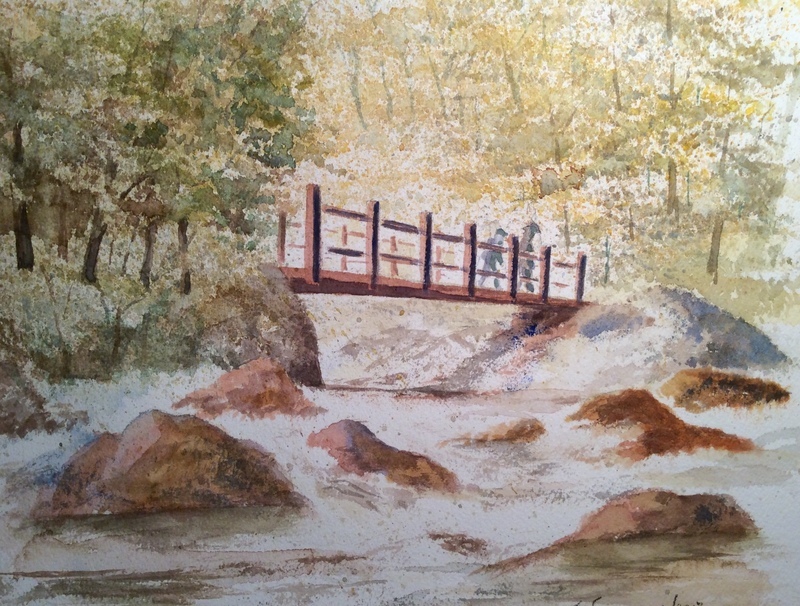 This is my first landscape for a while.

Congratulations to the football teams from Alabama and Georgia for winning their playoff games. They will meet in the national championship game on Monday night. 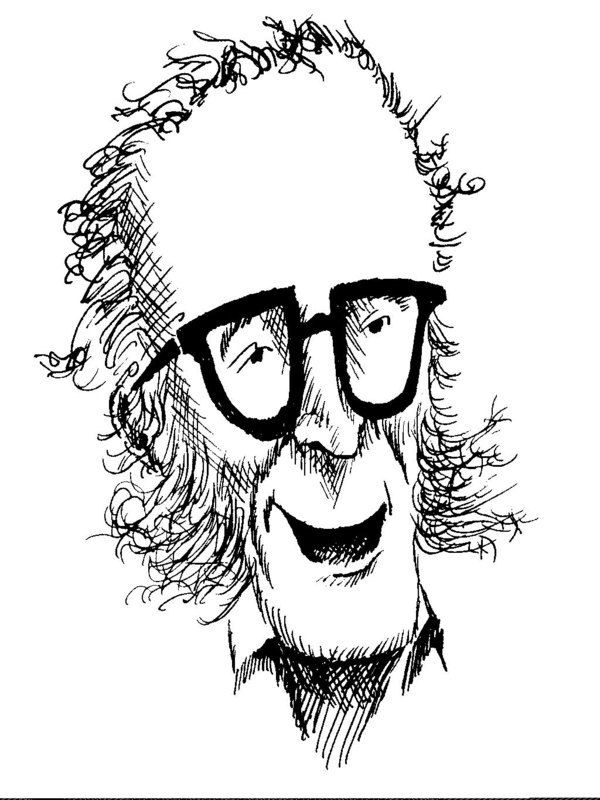 There is a cult of ignorance in the United States, and there always has been. The strain of anti-intellectualism has been a constant thread winding its way through our political and cultural life, nurtured by the false notion that democracy means that “my ignorance is just as good as your knowledge.” Isaac Asimov, scientist and writer (1920-1992)

Do not forget the victims of Hurricanes Harvey, Irma, Maria, and Nate. Add to these those devastated by the California wildfires. These and many other disasters mean that people need our help. The United Methodist Committee on Relief (UMCOR.org) is my favorite charity. Please make a contribution to yours. 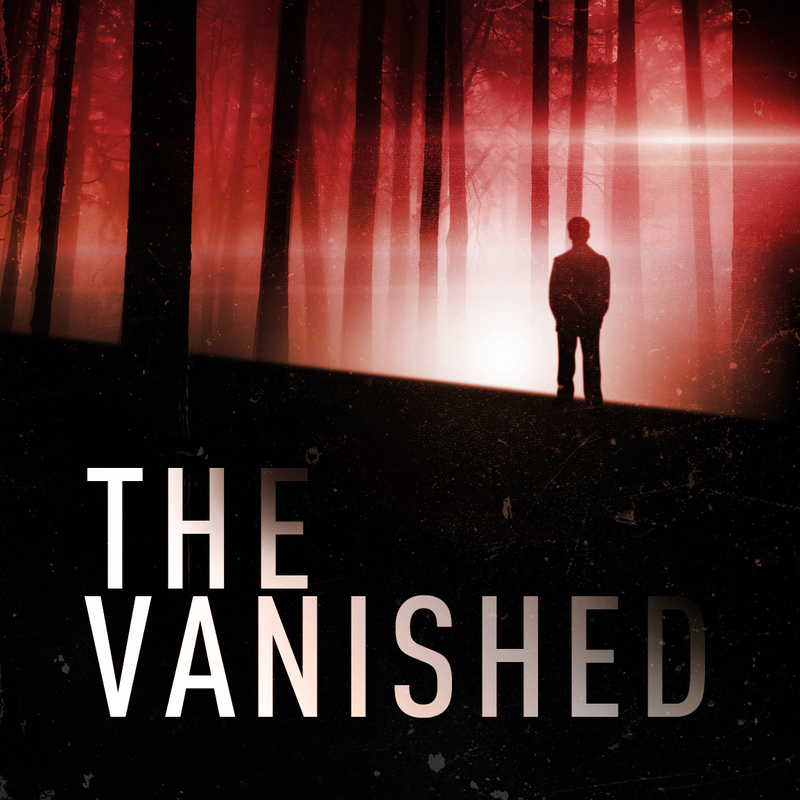 The Vanished. What about people who go missing, usually under suspicious circumstances, and are never found? They simply vanish. If that fascinates you, this is the podcast you will want to listen to regularly. Host Marissa Jones does a fine job of researching, interviewing, and writing this show on a weekly basis. The podcast is partnered with Wondery and has an excellent audio quality. The latest episode involves a young Atlanta-area woman, Jenna Van Gelderen, and has a maddening account of how law enforcement agencies in the area bungled the investigation of her disappearance

Crimetown. This multi-episode podcast takes a close look at former mayor Buddy Cianci and organized crime in Providence, Rhode Island. Cianci began his political career as a reformer but found that even though he had been elected mayor, real power in Providence lay outside city hall. The podcasts are hosted by Marc Smerling and Zac Stuart-Pontier, and they use a wealth of audio interviews with city officials, lawyers, friends of Buddy, crime bosses, mistresses, show girls, and wise guys to tell a mesmerizing story. And unlike many podcast episodes which last an hour or more, most of these are 30-45 minutes long.

S-town. The makers of This American Life and Serial have done it again.

They have created a podcast series that begins in one direction and zigs and zags through a variety of fascinating scenes, situations and characters. You think it’s about murder or small-town corruption, but by episode 3, it’s headed off somewhere else. The story comes from Woodstock, Alabama — just up the road from Tuscaloosa where I used to live — and begins with John B., an unhappy resident there, calling reporter Brian Reed and asking him to investigate the cover-up of a murder that has occurred in Woodstock. Once you have listened to episode 1, you’ll be on the roller coaster and won’t be able to get off.