Update on Tuesday, Jan. 2: Congratulations to all four teams (Oklahoma, Clemson, Georgia and Alabama) who participated in the College Football Playoff — and especially to the winners of last night’s games, Georgia and Alabama. The championship game next Monday should be a fun one for all fans, especially the Tiders and the Dawgs.

This evening, the college football playoffs begin, and those games will eventually determine the national champion. Alabama is one of the four teams that will compete. (Tennessee fans long for the Volunteers to be one of these final four teams, but, alas, the team had a less-than-stellar year.)

Many of us on the academic side of campus (including me) spent a lot of time grousing about the over-emphasis on football and the enormous salaries that many big-time football coaches make compared to, say, the governor of a state. The grousing is not misplaced, but we forget, ignore, or are unaware of the deep historical roots that the game of football has on the nation’s campuses. Some higher ed historians argue that that many colleges in the late 19th and early 20th century could not have survived if football had not been there to attract students and create a brand to which alumni and others, particularly doners, could be loyal.

Here is an article by David Labaree arguing this point.

Like any other market-based institution, the early college had to develop an attractive brand and to foster, in both students and the broader community, strong loyalty to that brand. Ideally, this meant turning current students into loyal alumni and community members into fervent fans. As public colleges emerged later in the nineteenth century, they followed the lead of the privates in seeking their own sources of support because they too lacked secure public funding.

In this quest, American colleges and universities have been uniquely and spectacularly successful. Go to any American campus and you will see that nearly everyone seems to be wearing the brand—the school colors, the logo, the image of the mascot, team jerseys. Unlike their European counterparts, American students don’t just attend an institution of higher education; they identify with it. It’s not just where they enroll; it’s who they are. In the US, the first question that twenty-year-old strangers ask each other is “Where do you go to college?” And half the time the question is moot because the speakers are wearing their college colors.

Football, along with other intercollegiate sports, has been enormously helpful in building the college brand. It helps draw together all of the members of the college community (students, faculty, staff, alumni, and local fans) in opposition to the hated rival in the big game. It promotes a loyalty that lasts for a lifetime, which translates into a broad political base for gaining state funding and a steady flow of private donations. 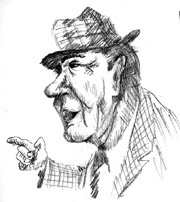 Labaree is the author of A Perfect Mess: The Unlikely Ascendancy of American Higher Education.

A final note: When I arrived at Alabama in 1978, the legendary Paul “Bear” Bryant was still the head coach of the football team. I was able to meet him once and talk very briefly with him.