Another reader on free expression; Anger as temporary madness

Where did English come from? The origins of English are many and varied. If you don’t know much about it, there’s a great sub-five-minute video from Open Culture embedded at the top of the JPROF.com website. 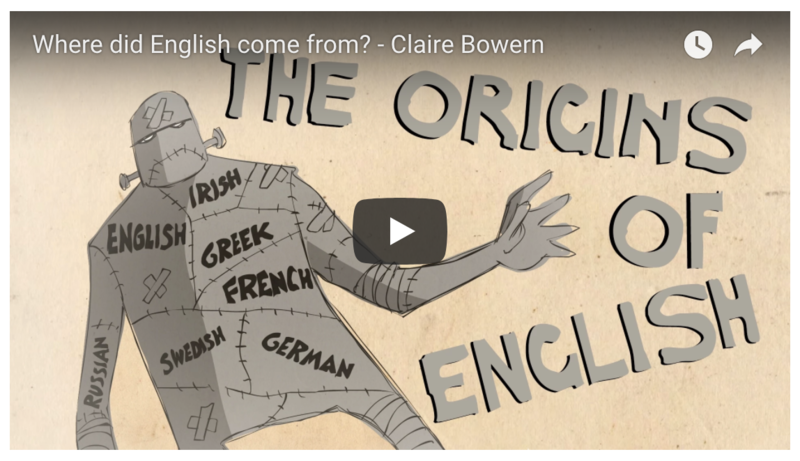 Gardening is a year-round activity: I spent a couple of hours on my tractor on Thursday afternoon sub-soiling the garden. A subsoiler digs deeply into the ground, much deeper than a plow. The purpose is to turn over a lot of dirt and create deep furrows. The rains and snows of winter will freeze and thaw repeatedly inside these furrows, and by spring the soil will not have as many clumps and will be easier to till and plant.

Do not forget the victims of Hurricanes Harvey, Irma, Maria, and Nate. These and many other disasters mean that people need our help. The United Methodist Committee on Relief (UMCOR.org) is my favorite charity. Please make a contribution to yours.

Another reader’s take on the First Amendment and free expression 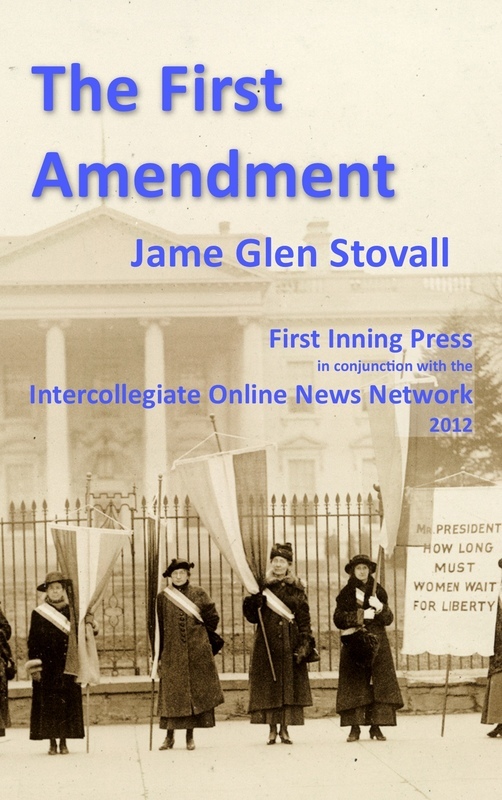 A couple of weeks ago I asked for your thoughts about the First Amendment and free expression and any of the current controversies related to these ideas. I have continued to get responses on this important topic. The latest was this week from Jim S. He says, in part:

If an opposing point needs to be presented, let that be set up and let the dialog go forward in an orderly manner with each side showing the respect of allowing the opposite side to fully present (without dominating the time) their position.

If a demonstration is needed, a large demonstration in front of city hall will usually draw TV and other news coverage. Is this effective? Here is a piece from scripture that seems applicable.

“In a certain city there was a judge who did not fear God and did not respect man. 3 There was a widow in that city, and she kept coming to him, saying, ‘Give me legal protection from my opponent.’ 4 For a while he was unwilling; but afterward he said to himself, ‘Even though I do not fear God nor respect man, 5 yet because this widow bothers me, I will give her legal protection, otherwise by continually coming she will wear me out.’” Luke 18:2-5 (NASB)

Yelling and screaming to block another person’s free speech is NOT free speech in any context of the phrase. Neither is violence. . . .

Jim’s entire statement is found below the signature of this email.

Other thoughts? I find the different thoughts and points of view fascinating, so please share them.

Something to think about: Anger as temporary madness

I ran across an interesting article a couple of weeks ago by Massimo Pigliucci, a philosophy professor, on how the Stoics of ancient Greece viewed and dealt with anger.

Seneca thought that anger is a temporary madness, and that even when justified, we should never act on the basis of it because, though ‘other vices affect our judgment, anger affects our sanity: others come in mild attacks and grow unnoticed, but men’s minds plunge abruptly into anger. … Its intensity is in no way regulated by its origin: for it rises to the greatest heights from the most trivial beginnings.’

I have been thinking a lot about that — and the entire article — since reading it. Take a couple of minutes to read it yourself.

Last week I included a bit about James Callan, an independent author, and a blog post on JPROF.com about where he gets his idea. Here’s another excerpt from that post.

A few years back, a number of church burnings occurred in east Texas. When they finally caught the two arsonists, the only reason given was, “Could we get away with it?” As I thought about it over a year, I just couldn’t imagine someone burning down buildings for no reason. What could be a reason? And that became Cleansed by Fire, where churches were burned. But there was a reason.

I have been having a lot of fun reading and selecting entries from The Devil’s Dictionary by Ambrose Bierce, a book you should know more about. Here are a few more: 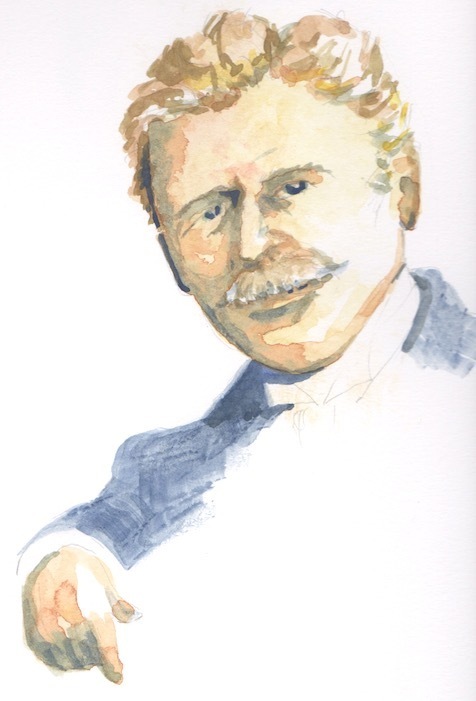 SAINT, n. A dead sinner revised and edited. The Duchess of Orleans relates that the irreverent old calumniator, Marshal Villeroi, who in his youth had known St. Francis de Sales, said, on hearing him called saint: “I am delighted to hear that Monsieur de Sales is a saint. He was fond of saying indelicate things, and used to cheat at cards. In other respects he was a perfect gentleman, though a fool.”

SACRAMENT, n. A solemn religious ceremony to which several degrees of authority and significance are attached. Rome has seven sacraments, but the Protestant churches, being less prosperous, feel that they can afford only two, and these of inferior sanctity. Some of the smaller sects have no sacraments at all—for which mean economy they will indubitably be damned.

POSTERITY, n. An appellate court which reverses the judgment of a popular author’s contemporaries, the appellant being his obscure competitor.

A friend asked that I do a painting of the farmhouse where her husband grew up. The house is gone, and there are no good pictures. She had a picture that gave me some information and said there was a road leading down to the house. I took it from there, and this is what I came up with. 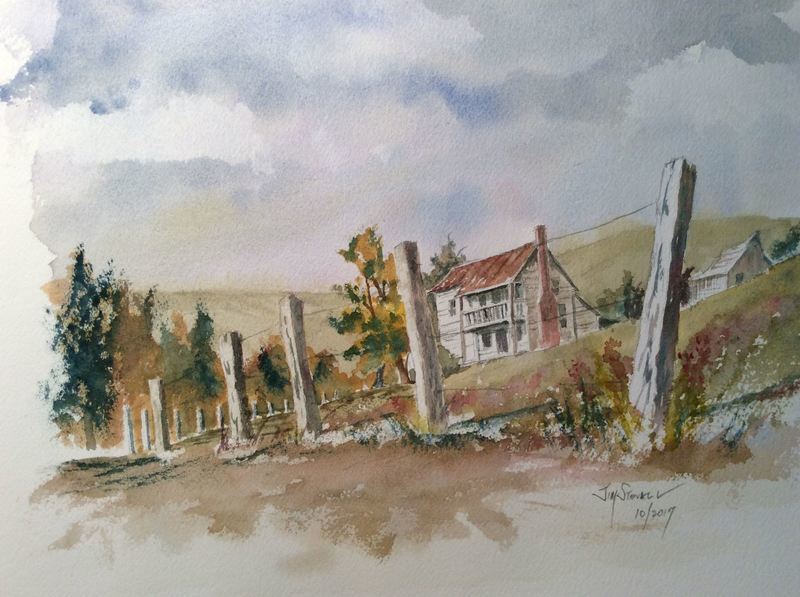 Statement by reader Jim S. on the First Amendment and free expression:

Jim, I started to respond to your enquiry about opinions on free speech. I found myself so wound around the axle that, what I wrote did not need to be sent. I became so emotionally involved that it became unworthy to be placed in public view.

Now, some may think what I just said is blathering and unnecessary. But, I imagine, and this is borne out by many I see yelling and screaming on the news, that many others have found themselves in that same position and need to calm down before they present.

I will do my best to put that aside because it does not add anything to a good understanding.

If an opposing point needs to be presented, let that be set up and let the dialog go forward in an orderly manner with each side showing the respect of allowing the opposite side to fully present (without dominating the time) their position.

If a demonstration is needed, a large demonstration in front of city hall will usually draw TV and other news coverage. Is this effective? Here is a piece from scripture that seems applicable.

“In a certain city there was a judge who did not fear God and did not respect man. 3 There was a widow in that city, and she kept coming to him, saying, ‘Give me legal protection from my opponent.’ 4 For a while he was unwilling; but afterward he said to himself, ‘Even though I do not fear God nor respect man, 5 yet because this widow bothers me, I will give her legal protection, otherwise by continually coming she will wear me out.’” Luke 18:2-5 (NASB)

Yelling and screaming to block another person’s free speech is NOT free speech in any context of the phrase. Neither is violence.

As to listening, there is a principle that applies, not just to me but to all of us. I hold some of my beliefs much stronger than others. For the beliefs I hold strongest, I will only listen to the different point of view if the other person is willing to listen to my position.

I do not insist that you believe as I do. However, I know in my heart that you would be in a better position if you did and I can and will wish that you did. I do insist that you have the freedom to choose what I believe or to choose something else. That’s a significant part of free speech.

For those beliefs I hold less strong, I am willing to hear another side if it is presented in a thought out, reasoned manner. There may be areas of agreement and I may find a different way to think about things.

On the other hand, if an argument is presented, with screaming and yelling as its most persuasive points, I am not so interested. If a position is presented based on untruths, I really don’t want to hear it and I will turn it off, even if the person may have some valid points.

Another example is when people intentionally kneel or sit while the national anthem is played.

First consider, why do we stand when the anthem is played? This is to honor our country, our flag and the privilege of being a part of America. When people who are able to stand during this brief time, choose to kneel or sit, what other conclusion can I come to but that they choose to dishonor our flag, our country and the privilege of being a citizen? For someone to say that was not what they were saying just does not ring true.

If they chose a different mode to present their point (and I believe many are available), I would be more likely to listen. As it is, I have made the choice to watch less TV on Sundays, Mondays and Thursdays, and I am not likely to return to watching those events (I realize I am a small drop in the bucket.)

This is my two cents, and, I believe, worth every penny.

Thanks for the opportunity Jim.