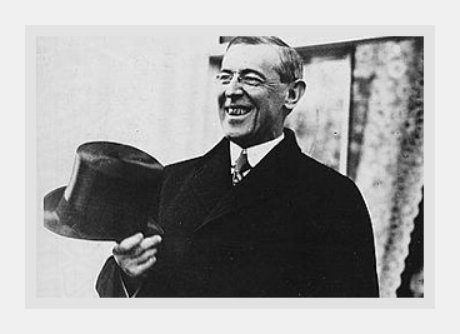 Woodrow Wilson was the central character of the suffrage debate story in much of its final decade. The debate had evolved from a state-by-state stage to a national forum, and Wilson’s actions as president made him the focus of most national issues.

With the suffrage question, Wilson did not seek that role and undoubtedly would have avoided it if left to his own devices. But there he was, and nothing could be done about it.

The early evidence is that Wilson was against women’s suffrage. “Universal suffrage is at the foundation of every evil in this country,” he said in 1976. (Pietrusaza, 292, quoting Levin, ??)

As were most people of his generation, he saw voting as the purview of the states. If states wanted to enfranchise women, that was fine. “Suffrage is not a national issue, so far,” he said in 1911, while campaigning in California. (Clemens and Cheezum, 119, quoting Lunardini and Knock, 657) “It is a local issue for each state to settle for itself.” In 1912, he confronted a suffragette in Pittsburgh that he had not come to any definite conclusion about suffrage. “It is a big question and I am only about half way through it. My mind words somewhat slowly and on this subject I really have not come to any conclusion.” (Clemens and Cheezum, 119, quoting Link and others, 24: 315) 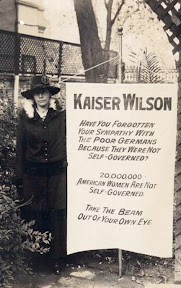 But just after his election in 1912, he explained his objection to giving women the vote was “that they are too logical. A woman’s mind leaps from cause to effect, without any consideration whatever for what lies between. She thinks too directly to be enfranchised en bloc. She would run into all sorts of trouble.” (Pietrusza, 292, quoting Lawrence, 136-137)

But Wilson, once in office, was more politic and quite possibly more politician. There was evidence that the nation was becoming more amenable to the idea of women voting, and Wilson could certainly see and hear. Wilson’s recent experience had been that his arrival in Washington the day before his inauguration had been largely ignored because of the first national suffrage parade marking down Pennsylvania Avenue at the time. He had had to take side streets from Union Station to the White House to avoid the crowds.

Upon taking office, Wilson received delegations of women who asked that he support a Constitutional amendment. He was evasive or disingenuous, or both. He could not support such an amendment because the Democratic Party had not endorsed it in its platform.

Wilson must have wavered on the issue throughout his term. He didn’t see it as all that important, telling a friend that suffrage “will make absolutely no changes in politics — it is the home that will be disastrously affected.” (Walton, 126, quoting Woodrow Wilson Papers, 32:21). But Wilson couldn’t make the women or the issue go away.

In one sense, they did go away. Delegations of women stopped coming to see him in 1915. They had grown frustrated with these non-responsive and often patronizing discussions. Wilson did not like to be challenged, particularly by women for whom he had not developed great respect.

But neither the issue nor the presence of suffragettes was ever very far away from the White House, particularly during his second term. Alice Paul and the National Woman’s Party made sure of that.

The big issue of Wilson’s presidency was peace, and then war. By the beginning of 1918, Wilson was dealing with America’s involvement in World War I. He had also been dealing with suffrage — the gentle entreaties of Carrie Chapman Catt and the National American Woman Suffrage Association and the thorns in his flesh from Alice Paul and the National Woman’s Party. He also saw what was happening in the country. It was time, he decided, to declare for suffrage.

And so he did. In a private meeting with a dozen Democratic congressmen on January 9, Wilson told them that for the good of the party they should support the suffrage amendment. Most in the room were astonished. Wilson had been a states’ rights man on this issue. Now he was saying that this principle could be bypassed because of the new political realities that confronted them all. Wilson also said another reason for reconsideration was the fact that ally Britain had just granted suffrage to its women because they had been so important in the war effort. (Walton 208-209, NYT 1/10/1918)

Wilson’s change of heart surprised and delighted suffragists in both camps. But the deal wasn’t done. Congress still had to vote on the measure, and the president’s tepid endorsement needed a strong follow-up. It wasn’t there. Wilson’s support was less than 100 percent, and the Nineteenth Amendment remained stuck on Capitol Hill.

It was not the first time that Wilson had given some indication of being pro-suffrage. In May of the previous year, Wilson had written to North Carolina representative Edward W. Pou, chairman of the U.S. House of Representatives Rules Committee rules committee suggesting that he appoint a Committee on Women Suffrage to consider a constitutional amendment granting the enfranchise to women. (The letter can be found at the North Carolina Digital Collections site and can be viewed at the end of this post.) “Of course, strictly speaking, it is none of my business, and I have not the least desire to intervene in the matter, ” Wilson says. He is responding to a plea from a friend, Mrs. Helen Gardener, he explains. “I think it would be a very wise act of public policy.” He’s not talking about the amendment, of course. He’s talking about the appointment of the committee.

The next January Wilson’s half-hearted reasons were followed by a half-hearted effort to support the amendment. It didn’t take long for Alice Paul and the National Woman’s Party to realize this, and they resumed their demonstrations. Wilson’s speeches were burned in Lafayette Square across the street from the White House. On February 9, an “effigy” of Wilson (Sue Shelton White of the NWP said it was only a cartoon of Wilson in The Suffragist) was dropped into the flames. Wilson’s “support” would mean relatively little over the next few months.

The president’s support did not turn the tide for suffrage in Congress as many hoped it would. Months of difficult lobbying lay ahead, and the political grounds needed more shifting. In November 1918, New York approved a women’s suffrage measure for the state, and a number of antisuffrage congressmen were defeated at the polls. The final votes on the constitutional amendment came in 1919. Just before the House of Representatives was set to vote in May, Wilson cabled them from Paris, where he was negotiating the end of World War I, to urge “immediate adoption” of the suffrage amendment. In a surprising nod to those who had been asking him for years to do just this, he acknowledged the “women and men who saw the need for it and urged the policy of it when it required steadfast courage to be so much beforehand with the common conviction.” (Walton, 234)

The next day, the House voted overwhelmingly for the amendment, and on June 4, the Senate also gave the amendment the two-thirds vote it needed to go to the states for ratification.

So, was Woodrow Wilson a Suff or an Anti? He seemed to be both, and not a very good one of either.

Is that really fair to Wilson, however? Probably not.

Wilson was neither a suff nor an anti because, like most Americans, suffrage wasn’t really on his radar screen. Wilson was a politician, though, some might argue, not a very good one at times. He probably (check this where you can find it) saw suffrage not as a moral question but as a political one. As long as he was not threatened by suffragists politically, he had no reason to be for it. He could even indicate that he was for it — as he did when he voted in favor of it in the New Jersey election — but suffrage was not part of his progressive agenda.

At the end of his term, when suffrage looked like it might be advantageous to his goals, he was strongly in favor of the Nineteenth Amendment. Wilson and others thought that women would be more likely to favor peace and his League of Nations, and the election of a Democrat in 1920 would vindicate all that he had worked for in that regard. Consequently, the Nineteenth Amendment looked good to him at that point, and he took some pains to urge and assure its passage.

Is this correct? We’ll delve into the record to see.

Wilson’s aide Joseph Tumulty wrote and admiring memoir of his time in the White House with Wilson, and he does not mention suffrage, Alice Paul, Carrie Chapman Catt or the Nineteenth Amendment, even though there is a short chapter about Prohibition and the Eighteenth Amendment. (Tumulty, 1921)