The Intersection of Journalism and Fiction

The Ossoli Circle — one of the oldest women’s clubs in the South — has asked me to speak today.

The invitation came because of the mystery novel, Kill the Quarterback, which was published last year. The following is a text of some of what I plan to say: 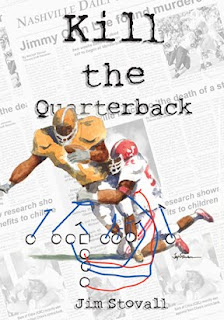 When people ask what Kill the Quarterback is about, I have a ready answer. “It’s not about football.”

The story is about a police reporter in Nashville who covers the investigation into the murder of a star quarterback. The reporter, Mitch Sawyer, finds out things about the murder that the police do not know. Mitch has friends on the police force, but he also has enemies. One of those enemies is the guy who heads the muder investigation.

So, Mitch – an independent cus – doesn’t tell what he knows.

Besides, Mitch thinks the police should do their own investigating. He doesn’t feel the need to help them out.

Mitch gets more deeply involved in all this, and he finds a far more complicated story than what he had imagined. And he finds this story hitting close to home.

Eventually, Mitch becomes a target of the murderer. And thereby hangs the tale.

I have taught journalism and writing for more than 30 years. I am fortunate enough to have a textbook on writing that has been in print for 25 years and is now in its seventh edition. I am former newspaper reporter and magazine staff member.

So why write fiction?

First, I think stories are important. Whether they are fiction or journalism, the stories that we tell each other have a great deal to do with who we are, what kind of a society we have and what kind of a life we lead.

All this is journalism.

But our fiction is also an important factor in the way we view the world. We may look at fiction as just entertainment, but I think it is far more than that – that it has a much higher purpose.

Fiction is a powerful part of the culture, and our ideas about who we are and what the world is like come through our fiction.

That’s why I have turned to fiction, at least briefly. I want to use whatever modest gifts I have for writing to tell stories.

Besides, there are many similarities between journalism and fiction. I know a statement like that invites many acerbic and waggish comments about too much journalism really is fiction.

But, of course, I’m talking about something that goes beyond the daily news reports and how accurate we think they are.

One of the things I teach students is that all good media writing exhibits four characteristics:
— accuracy
— clarity
— precision
— efficiency
(explain)

In journalism, we try to descibe the world we see as accurately as possible. Journalists take great pains to make sure their facts are right. They quote people correctly. They check and re-check their information. While they do not always succeed in this difficult task, they try as part of their professional responsibilities.

Yes, you might say, but a fiction writer can just make things up.

That is true to some limited extent. Let me give you a somewhat silly example of what I am saying:

Let’s say you’re writing a Superman story. Part of the story has a busload of kindergarten children careening off a cliff. Well, this is a Superman story, so what has to happen?

That’s right. Superman has to save the children. If he didn’t, he wouldn’t be Superman, and this wouldn’t be a Superman story. The writer who didn’t let this happen wouldn’t be true to the world in which Superman operates.

Likewise, the mystery writer – something I aspired to be in writing Kill the Quarterback – has to live up to readers’ expectations about the genre.

• The mystery has to be solved.

• The major dilemmas have to be resolved.

• Clues about the killer should be left out in the open.

• Good has to triumph – to some extent – over evil.

And this has to be done through the natural order of things in the world that the writer has made. The writer can use coincidence to get his characters into trouble, but he or she cannot use coincidence to resolve the big dilemmas or the story itself.

These are some of the rules. Some are based on the common practices of mystery writers. Some are the expectations of the readers.

Plotting a good mystery novel – and staying true to the world of the genre – is a challenge. It’s fun, but it is definitely a challenge.

Personally, I find plotting far harder than the writing itself. Tracing the arc of the story so that the protagonist gets from the beginning to the end is something I struggle with. It would be much easier if I didn’t have to follow the rules – if I didn’t have to be true to the world in which the story is set. If, in other words, I could just make it up.

Any writer asks two things of a reader:

• the reader’s time and attention

• a suspension of disbelief – that is, acceptance on the part of the reader that the place where you are going is a world created by the writer.

The reader must be willing to make this investment.

The writer, on the other hand, must understand that this investment on the part of the reader is limited.

The writer’s first job is to be true and faithful:

• true to the world the writer has created

• faithful to the generally accepted rules of that world

But the writer must then open up that world to the reader in a way that is entertaining, enlightening and informative.

The central responsibility of the writer, I think, is to give the reader an accurate portrayal of the world that he or she is describing. That is the service the writer performs.

And that responsibility does not change whether one is writing fiction or journalism.