Lincoln at 200; Lincoln the writer 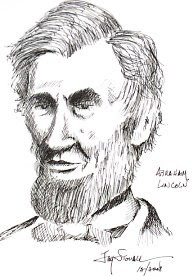 Once Americans get through Christmas, they will be faced with two important dates that inter-weave themselves politically and historically: the inauguration of Barack Obama as president of the United States on Jan. 20 and the 200th anniversary of the birth of Abraham Lincoln on Feb. 12.

For the moment, the Writing Wright will set Barack aside and deal with Abraham.

A good place to start our considerations of Lincoln is at the Reading Room of the New York Times, where a few short essays about the 16th president now reside. The essays are written by Ed Rothstein and Charles (Chip) McGrath, and they are drawing some interesting responses through the Times’ moderated forum.

When I think of great presidents — truly great — I think of three: George Washington, Abraham Lincoln and Franklin Roosevelt. Their greatness, to be fair to other presidents, is not defined by just personal characteristics but also by the times and crises they faced.

Of those three, only Lincoln produced any significant amount of important writing. In fact, a new biography, Lincoln: the Biography of a Writer by Fred Kaplan, has recently been published. I have not read the book yet, but getting a copy for Christmas or during post-Christmas shopping is not out of the question. So what’s written here will be second-hand comments. At the Times, McGrath devotes one of his essays to Lincoln the writer, and Rothstein also deals with this aspect of Lincoln in “The Literal Powers of Words.”

Not only did Lincoln write well, he actually wrote about writing. Rothstein writes:

But look at what Lincoln says in his Lecture on Discoveries and Inventions, delivered in Jacksonville, Ill., in 1859, the year before he was elected President. The lecture is not terribly gripping, but it builds to a climax when it comes to the invention of writing. Lincoln describes what a remarkable innovation writing was, and how much it has advanced the societies that have cultivated it.

So what did he say? Here is an exerpt:

Writing — the art of communicating thoughts to the mind, through the eye — is the great invention of the world. Great in the astonishing range of analysis and combination which necessarily underlies the most crude and general conception of it — great, very great in enabling us to converse with the dead, the absent, and the unborn, at all distances of time and of space; and great, not only in its direct benefits, but greatest help, to all other inventions.

Get ready for lots of Lincoln over the next couple of months.

The Writing Wright
Kill the Quarterback
A larger version of the pen and ink drawing of Abraham Lincoln (above) can be found at First Inning Artworks.