Stories behind the Frost/Nixon movie, confrontation 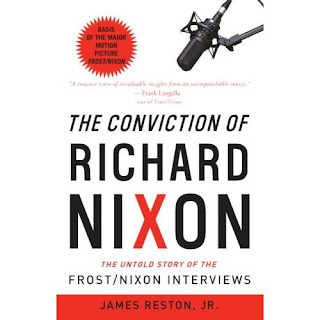 The stories behind the 1977 verbal confrontation between Richard Nixon and David Frost continue to fascinate. The release of the Ron Howard movie Frost/Nixon has given us some great stories from that era. We looked at the transformation of David Frost from satirist to journalist a bit in an earlier post.

National Public Radio’s Fresh Air program yesterday had James Reston Jr. as a guest. Reston was one of the researchers that helped David Frost prepare for the interviews, and he told some throat-grabbing stories about the information that he was able to come up with when he interviewed presidential aide Charles Colson.

Reston was one of the people who believed Nixon had committed crimes and that this set of interviews was going to be the only trial he would ever get. He was satisfied with the outcome, and he later wrote about it in The Conviction of Richard Nixon: The Untold Story of the Frost/Nixon Interviews. A play was based on the book, and the current movie is based on the play.

The interview is online. It’s only 18 minutes long (for those of us old enough — remember the 18-minute gap?) and well worth listening to.