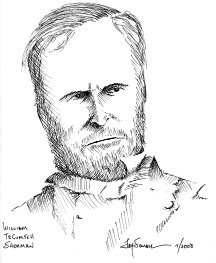 The Union Army, under the command of William Tecumseh Sherman, decamped from a devastated and burning Atlanta on November 16, 1864 and marched across the expanse of Georgia until it reached Savannah. The purpose, according to its commander, was to bring the horrors of war into the farms, fields, parlors and living rooms of the South in a way that would teach Southerners the futility of continuing the fight for their independence.

The march through Georgia took almost exactly a month. A week before Christmas, Sherman wired President Abraham Lincoln from Savannah, offering him the city as a “Christmas present.”

Sherman succeeded far beyond anything that he had in mind at the beginning of his journey.

As Ed Caudill and Paul Ashdown (two of my good friends and colleagues at the University of Tennessee) write in their Sherman’s March in Myth and Memory:

The myth of the March and the man gained momentum for the rest of his life. Old soldiers told tales and reminisced, while Sherman lectured and wrote his memoirs. By the time of his death in 1891, the March was a term that meant one march, embodied in one man in American history. Ironically, the “Old South” and “the March” had become intimately linked as thesis and antithesis — agrarian and industrial, tradition and modernism, spiritual and material. . . .

The memory endured in the South and became a nationsl one, encapsulated in a few seconds from a film now three-quarters of a century old, Gone With the Wind: “And the wind swept through Georgia: Sherman!” in giant letters as the screen goes up in flames.

Caudill and Ashdown’s book is the third of three than examine the myths that grew out of prominent Civil War figures. The two earlier books looked at John Singleton Mosby, the Gray Ghost, and Nathan Bedford Forrest. Mosby’s accomplishments during the war were relatively minor, but Mosby was literate and wise in the ways in which an image could be formed, and he also had the good fortune to live well into the 20th century. Forrest, more impressive in his military accomplishments than Mosby, was not so fortunate in any respect and is now a historical oddity that fires controversy even at the mention of his name.

Sherman is a towering figure of the war, a man who is mentioned along with Grant, Lincoln and Lee. He lived longer than Forrest and wrote his memoirs, but he never appeared to have much concern for his image — at least, not as much as Mosby showed. Sherman seemed content to leave his image in the hands of others, especially journalists whom he professed to hate.

I talked with Paul Ashdown about the role journalists played in creating the myths of these men, and asked him if anything about the three-book study surprised him. (Click on the arrow below to being the audio: 3:34):

What happened on the march through Georgia is just one of the mysteries of myth that surround William Tecumseh Sherman. The book by Caudill and Ashdown reveals him to be a fascinating and complex character far beyond the hero or villain that emerged from the road across Georgia.

Each of the books in this series is a shrewd exploration of the way in which memory and myth work in the American culture. They are highly recommended.

A larger version of the pen and ink drawing of Sherman (above) can be found at First Inning Artworks.