The man who didn’t invent Christmas 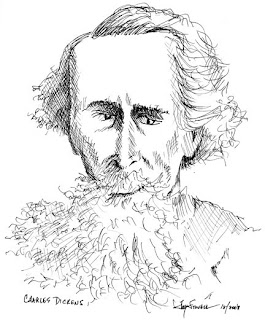 Several months ago I posted on an earlier blog an essay on book titles that make too much of a claim for their subjects. And I have re-posted it here on the Writing Wright. To have titles such as “The Man Who Invented Castro” (Herbert Matthews) or “The Man Who Invented Sex” (Harold Robbins) is idiotic.

Now we have The Man Who Invented Christmas: How Charles Dickens’s A Christmas Carol Rescued His Career and Revived Our Holiday Spirits by Les Standiford.

But even the author seems to have the good sense to reject the title of his books. In a review of the book in the Washington Post, Jonathan Yardley has this paragraph in which he quotes the author:

Totally — and correctly — contradicting the title of The Man Who Invented Christmas, which probably is the invention of someone in his publisher’s marketing department, Standiford says that “no individual can claim credit for the creation of Christmas, of course — except, perhaps, the figure that the day is named for.” No, Dickens did not “invent” Christmas. But he “played a major role in transforming a celebration dating back to pre-Christian times, revitalizing forgotten customs and introducing new ones that now define the holiday,” including the turkey as the centerpiece of the day’s feast. He gave us “a secular counterpoint to the story of the Nativity,” and “complemented the glorification of the nativity of Christ with a specific set of practices derived from Christ’s example: charity and compassion in the form of educational opportunity, humane working conditions, and a decent life for all. Just as vital as the celebration of the birth of a holy savior into a human family was the glorification and defense of the family unit itself.”

Too bad that the “publisher’s marketing department” has more influence over the title of the book than the author. It does neither the publisher nor the author credit.

The pen and ink drawing of Charles Dickens (above) can be seen in more detail at First Inning Artworks.