What is real, and what just exists in our mind’s eye, about our past?

Those were the questions two journalism historians had when they took on John Singleton Mosby, the famous Gray Ghost of the Confederate Army. What they produced is an insightful and interesting book titled The Mosby Myth: A Confederate Hero in Life and Legend.

Paul Ashdown and Ed Caudill (two colleagues and good friends) were fascintated by the fact that Mosby, a minor character in the gigantic events that occurred in America between 1861 and 1865, should have such a large place in the consciousness of America. Mosby is said to be the most famous non-general to emerge from the smoke of the war.

Even before the war ended, Mosby and his “raiders” had gained an outsized reputation due not just to their courageous exploits but also because of Mosby’s careful attention to his own image. Ulysses Grant once ordered that they be executed immediately if they were caught.

I spoke with Caudill about how he and Ashdown came to write this book and asked how they chose Mosby as their first subject. Click on the arrow below to begin the audio (6:30):

The book, which was published in 2002, became the first in a series of three that explore the myths and images that surround Civil War characters: 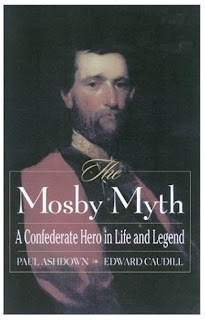 The authors explain how the myth of Mosby began in the days of battle and how it grew as the memory of the war faded and the images of the war emerged. Part of the Mosby magic was simply that he outlived most of his Civil War contempories, dying in 1916, and thus had many more opportunities to shape was generations thought about him.

The authors bring us into the present day with a look at the 1950s television series, The Gray Ghost, and the treatment of Mosby in modern novels and movies.

We will be exploring each of these book in subsequent post.

See a full size image of the pen and ink drawing of Mosby (above) at First Inning Artworks.