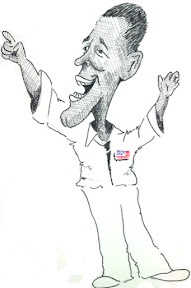 Richard Monastersky, a senior writer for the Chronicle of Higher Education, has an article in a recent edition of the publication pointing out a number of things about the election of Barack Obama and Joe Biden with regard to higher education.

The article then quotes a number of academicians about Obama’s professorial and deliberative style. One drew the comparison between him and Bill Clinton, another ex-law prof:

But Mr. Obama must avoid the temptation to overdose on deliberation, says Ms. Hoff. (Joan Hoff, a research professor of history at Montana State University at Bozeman.) The nation witnessed the hazards of that tendency during the presidency of Bill Clinton, another former law professor. “Clinton would talk everything to death and not come to a decision,” she says, particularly with regard to delayed decisions about Kosovo, Bosnia, and Rwanda.

And then there was the ultimate academician, Woodrow Wilson.

The article is titled “America Elects a Professor in Chief.”