The kind of fight I like — over a man of letters 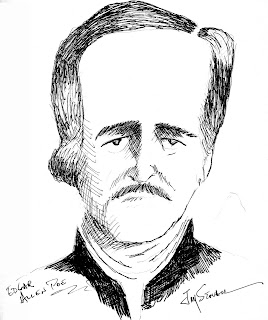 This is the kind of fight I like. I’m pulling for Bal’mer.

According to an article in the New York Times this weekend, two scholars have gotten into a clash over which city — Philadelphia or Baltimore — has the most claim to the legacy of Edgar Allen Poe.

Baltimore is the city most associated today with Poe. He died there in 1849. How he died is, for some, an open question. Some say it was alcoholism, some say other diseases, some even say murder. He had lost his wife about two years before that while they were living in New York City.

Poe lay in an unmarked grave in Baltimore for two decades, but then th city embraced him and today he is honored as a native son.

But Philadelphia has more claim on Poe than Baltimore, according to a Edward Pettit, a Poe scholar. It was in the City of Brotherly Love that Poe wrote some of his most famous works. Pettit argues that the city’s rampant violence and crime served as a natural inspiration to Poe’s marcabre outlook and his detective fiction. Poe is widely acknowledged as having invented the modern detective genre. Pettit wants Poe’s body moved to Philly.

Not so fast, says Jeff Jerome, curator of the Poe House in Baltimore. Poe is too much a part of the city’s lore and character to be moved now. Besides, Philadelphia is a little late in claiming Poe since the city has ignored him for 160 years.

Of course, there is always Richmond, where Poe grew up and to where he had planned to return eventually. Poe always considered himself a Virginian. But Richmond (wisely?) has not asked for the return of the body.

In all this, I stand with Baltimore, which is a far more interesting place than Philadelphia. Baltimore is a dank, working class town with no Mainline pretentions but lots of interesting character and architecture. It’s the city where Edgar Allen Poe should be from, even if he isn’t.