Mencken on being a newspaper reporter

In all of the events of H.L. Mencken’s eventful life, nothing matched his days as a young newspaper reporter (circa 1899):

My adventures in that character (a newspaper reporter) . . . had their moments – in fact, they were made up, subjectively, of one continuous, unrelenting, almost delirious moment – and when I revive them now it is mainly to remind myself and inform historians that a newspaper reporter, in those remote days, had a grand and gaudy time of it, and no call to envy any man. . . . I believed then and believe today, that it was the maddest, gladdest, damndest existence ever enjoyed by mortal youth. 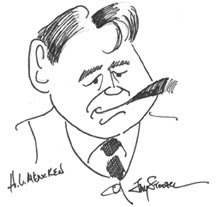 H.L. Mencken was a newspaper and magazine editor, critic of American letters, and chief curmudgeon of the first half of the 20th century. His sharp wit was always at war with pomposity and hypocrisy and earned him the title, “Sage of Baltimore.”

His experience as a newspaper reporter predated mine by about 60 years, but the feeling was the same. I, too, had a “grand and gaudy time of it, and no call to envy any man.”

The passage quoted here is from his memoir Newspaper Days.