The way writers write – their habits, productivity, quirks, methods of procrastination, etc. – fascinate a lot of people, including me. 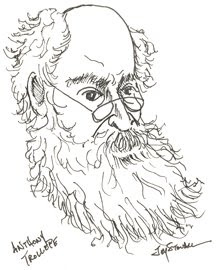 One of my favorite stories in this vein is that of Anthony Trollope, the mid-19th century British novelist and author of the Barsetshire series and the Palliser novels. Trollope’s books were highly popular in his day, and his work has retained many fans in the 20th and 21st centuries.

Trollope was manic about his writing. He would arise at 5:30 every morning and write for at least two-and-a-half hours. He would produce 250 words every 15 minutes. In his early years as a novelist, he had a job with the Post Office that required some train travel, and he would keep this writing schedule even if he were traveling.

Trollope saw novel-writing as work that had to be done. He wasn’t interested in inspiration nearly as much as productivity.

When I have commenced a book, I have always prepared a diary divided into weeks . . . In this I have entered day by day the number of pages that I have written, so that if at any time I slipped into idleness for a day or two, the record of that idleness has been there staring me in the face – and demanding of me increased labour.

Trollope made no secret of the fact that he wrote for money – something the critics of his day disdained.