• A writer is supposed to “render to the audience things they haven’t seen.” So says Jim Webb, writer. He’s also a senator.

Politicians who put their names on a book and claim authorship are not unusual. The ones who actually write the book are unusual indeed.

And the politician who says of himself, “I am principally a writer”: Now that is rare.

And that is Jim Webb, the freshman senator from Virginia.

Webb makes that legitimate claim as he goes around the country touting his new book, A Time to Fight: Reclaiming a Fair and Just America. 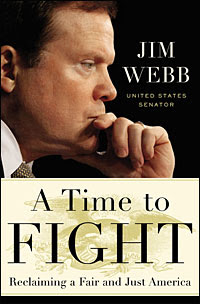 Webb was interviewed by Terry Gross on National Public Radio’s Fresh Air this week, and much of the interview deals with Webb’s book, his background and the political issues of the day. But about 24 minutes into the 30-minute interview, Webb talks about his becoming a writer, something he “never thought he would end up as,” after he had returned from Vietnam and left his military career.

Webb wrote Fields of Fire, a novel about Vietnam, in 1978, and the book has become a classic in the area of writing about the Vietnam combat experience.

Webb has written five other novels and a number of non-fiction works as well. He was an embedded journalist with troops in Afghanistan in 2004.

The duty of a writer, Webb says, is to “render to the audience things they haven’t seen.”

And the process of writing, he adds, is to study something, think deeply about it, and then “go on the record.”

Not a bad trait for a politician.