On being an author – without doing any writing

We all know that politicians don’t write their own speeches.

But novelists? Mystery novelists, in particular?

Surely no “novelist” would lend a name to a book that he or she hadn’t written. Well, if you think that (as I did for a long time), you are most naive. This kind of intellectual dishonesty goes on more than you would think.

Over at the DorothyL listserve, a neat and lively community devoted to mystery and suspense writing, the topic of the “celebrity” author, who really isn’t an author, comes up regularly. This week’s discussion produced an interesting story about Steve Allen, the actor and television comedian who really began the Tonight Show.

Allen was a multi-talented guy who has his name on a number of mystery novels, and during his lifetime, he insisted that he wrote them. Not so, says Enid Shantz. She and Tom Shantz operate Rue Morgue Press, which is devoted to re-publishing the “traditional mystery which first came to prominence during the Golden Age of detective fiction (1920-1940).” They used to run a bookstore also named Rue Morgue when they encountered the Steve Allen/mystery writer conumdrum.

Here’s the story Enid tells (reproduced here with her permission):

Did Steverino write his mysteries?

We had long been told by insiders that he didn’t and mentioned this in our store newsletter a number of years ago. One day a few months later a man came into the store, looked around hesitantly, and then bought several books upon Tom’s recommendation and left. That evening when we were going through our credit card receipts we saw the name “Steve Allen” on one of them, and remembered he was in town speaking at the library. 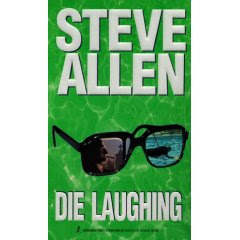 Several weeks later a customer mentioned that during Allen’s talk, he had been asked about the persistent rumors that he didn’t write his books, which he had heard from the Rue Morgue, and that Allen became quite angry and said he was going to march right over to the store and set us straight.

I guess he lost his nerve–but a few days after his visit we did get a phone call from “Mr. Allen’s secretary” informing us that Mr. Allen did indeed write his own books, in word for word the same way he told Betty Webb that he did. So we thought, well, maybe he did–after all he’s a smart, multitalented guy who did publish some literary short fiction in the 50s and 60s.

Some time after that incident we were having a signing at the store for Robert Westbrook, a New Mexico author who had written several paperback mysteries set in Taos. Westbrook is the son of Sheila Graham, the Hollywood gossip columnist who had the fabled affair with Scott Fitzgerald. (Westbrook is not her son by that union, but from a later one with either Robert Taylor or Victor Mature.) He was an entertaining speaker, who told us that he had started his writing career as a teenager when his mother frequently turned her columns over to him to write when she was too incapacitated to do so herself.

He bounced around from one writing job to another–including one, many years later, ghostwriting the Steve Allen mystery series, for which he was a natural because of his Hollywood background. The way he tells it, he conceived and wrote the books in their entirety and the only contribution Allen ever made was to insert a few inappropriate reminiscences and anecdotes into the stories.

However, Westbrook didn’t write the final book in the series–his wife did, as he had other deadlines to meet and she’d always wanted to write a mystery. Other than the fact that of course he had been contractually obligated at the time not to disclose all this (the contract was long over by then), he said that Allen was so accustomed to having other people write his material that he truly came to think of it as his own, an extension of his own personality.

But you know, people are going to keep on believing that Allen wrote his own books, just as they believe that Margaret Truman did and that the late Eliot Roosevelt really did leave behind a trunkful of unpublished manuscripts when he died. They’ll believe it because they want to.

Ghostwritten celebrity mysteries have been around since at least the thirties, with people like Helen Wills Moody, Queena Mario, Helen Traubel, and later George Sanders and possibly Gypsy Rose Lee employing ghost writers to produce mysteries published under their names. According to Jeff Marks, the jury is still out on Gypsy, but so far as I know the only celebrity, if he can be called that, who has beyond a doubt written his own mysteries is Kinky Friedman.

But this one — claiming to have written a book you didn’t write. Somehow, that really offends me.