The Indiana primary – 40 years ago

The talking heads of the TV babblerati certified it to be true — this is the first time in 40 years the Democratic primary election in Indiana has been important. That would be 1968, and Robert Kennedy had just jumped into the race for the Democratic nomination after Lyndon Johnson had just bowed out. 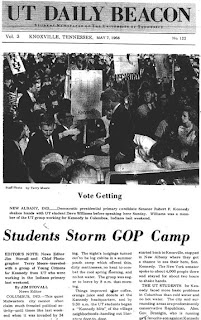 I know. I was alive. And I was there — in Indiana, the weekend before the primary election.

At the time, I was a sophomore at the University of Tennessee and news editor of the UT Daily Beacon. As news editor, I was running a staff of reporters, editing copy and having the time of my life. The war in Vietnam meant something to all of us. The designation on my draft card was II-S, which meant I had a student deferment. That could change quickly and did for some people I knew.

I was at my desk one afternoon in late April when I got a call from Fred Parke, leader of UT’s Young Citizens for Kennedy. Parke said the group had chartered a bus and were taking about 30 Tennessee students to Indiana that weekend to canvas for Kennedy. It would be the last weekend before the primary election on the next Tuesday. There were two seats left on the bus.

Do you think there’s a Beacon photographer who wants to come along?

I rounded up the Beacon’s chief photographer, Terry Moore, and a couple of days later, on a Friday afternoon, we found ourselves bundled up with a bunch of Kennedyites and headed north toward a small town called Columbus. We would be staying in cabins at a summer camp nearby, and the group would spend Saturday dividing up the town and going door to door, handing out literature and soliciting votes for Kennedy.

We arrived sometime after midnight and found ourselves billeted in cabins with no heat to guard against the spring cold and no hot water. But the next morning, coffee, donuts and orange juice at the local Kennedy headquarters lifted everyone’s spirits, and the students hit the streets. I played my role as reporter and wandered around town to see what I could see. My first stop: the local newspaper office where the local journalists were putting together the Sunday edition. I talked with several people on the staff, including the editor, and they invited me to the backshop to watch them make up the paper. (The paper was “hot type,” which will mean something to journalism folks over forty but doesn’t bear much explaining otherwise.)

I also met the mayor who explained the Republican nature of the area and said he didn’t think people of his town were very excited about the presidential campaign. They did like having visitors from Tennessee, however. That evening, the townsfolk threw the group a fried chicken dinner and provided everyone a warm bed to sleep in. Most of the people who did this were not Kennedy supporters, just folks who wanted to be hospitable. 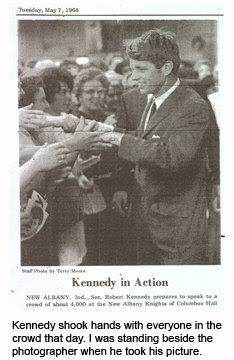 The canvassing continued on Sunday, and late that afternoon, we boarded our bus for the drive back to Knoxville. We stopped at the last town in Indiana before crossing the Ohio River — New Albany — where Kennedy was scheduled to speak. A massive crowd of about 4,000 people gathered around a small Knights of Columbus hall and went into a frenzy when Bobby Kennedy and his wife Ethel arrived with their campaign entourage.

Kennedy spoke for a few minutes and then a handshaking line formed, and Kennedy shook the hand of every person there — including mine. While he spoke coherently, I remember thinking that he looked like he was in a daze, undoubtedly fatigued from four weeks of non-stop campaigning. Still, the people with whom I was traveling were thrilled to see him, and the memory was burned into their heads.

And into mine, especially because of what happened shortly thereafter.

On the next Tuesday, Kennedy won the primary and became the leading candidate for the Democratic nomination.

Four weeks later he was dead, assassinated on the night he won the California primary.

I have thought of that trip often in the ensuing years, and I was happy to recently find a book about the Kennedy campaign in the Indiana primary. Ray Boomhower has written a lucid account of what happened and how important it was in Robert Kennedy and the 1968 Primary — a small piece of history worth knowing more about.