That’s why, when I got my copy of Sports Illustrated last week, I was taken aback by the headline on the cover. (Yes, I get a hard copy of Sports Illustrated. It apparently comes as part of the audio subscription I have with Major League Baseball. I didn’t ask for it and wouldn’t buy it otherwise. I even turn down the copy of the swimsuit issue, which probably disappoints the editors because they use their highest level of sports knowledge to produce this profound epic. But I digress.) 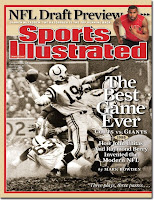 The headline on this week’s issue of SI reads: The Best Game Ever. One of the subhead is “How John Unitas and Raymond Berry Invented the Modern NFL.”

These are probably all terrific books. I have read only one of these books: Frank Deford’s book on John McGraw and Christy Mathewson. It was okay though in the end disappointing because Christy Mathewson died early and for some very wrong reasons. He was from all accounts a truly fine person and did not deserve his fate. (BSP alert: The watercolor of him at right can be found at First Inning Artworks.)

But nowhere in the book does Deford really make the case tht McGraw, Mathewson and the Giants invented modern baseball. How could he? It is a ludicrous argument to embark on in the first place.