THE LAST CASUALTY, (Amazon) the latest thriller by Cyn Mobley, is like an Indiana Jones movie, a wild ride that never lets you catch your breath. 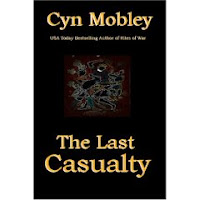 David Dalt is a U.S. Navy Episcopal priest and an ex-SEAL — except that apparently there are no ex-SEALs. (Just as Marines will tell you there are no ex-Marines.) Dalt is drawn back into the life when he hears the confession of a dying man. The man is a spy who has betrayed Dalt’s old unit. Dalt’s vows won’t allow him to violate the confessional, but they can’t stop him from trying to save his comrades.

It’s a complex tale that moves at the pace of a speeding train.